Based in Luxembourg and Mainz, Julien Hübsch engages in notions of graffiti and vandalism to create environments that oscillate between expanded painting, site-specific sculpture and spatial installation. We caught up with the artist over Zoom and got a virtual tour of his studio in Mainz as well as some insight into his light-handed approach to urban space.

Julien, post-vandalism is a term you’ve used to describe your work. Can you explain what that means exactly?

I don’t know if there’s an official definition of the term since it’s quite new. It emerged mid-2019 to describe a certain aesthetic of overpainted vandalised walls. It’s about the meanings behind certain objects used in graffiti. It was made popular by an Irish artist and curator called Stephen Burke. He started this Instagram page called post_vandalism. It was quite niche at the time, but it’s blown up since then.

I was working in that field anyway, but I was searching for a concrete term to describe what I was doing. That was the case for a lot of people I think. Artists were working with the tools of graffiti, but who didn’t identify as urban, street or mural artists were looking for a space like this. Because their work isn’t abstract expressionism, minimalism or found objects, it combines all of these things. So it became this niche place for a lot of young artists. 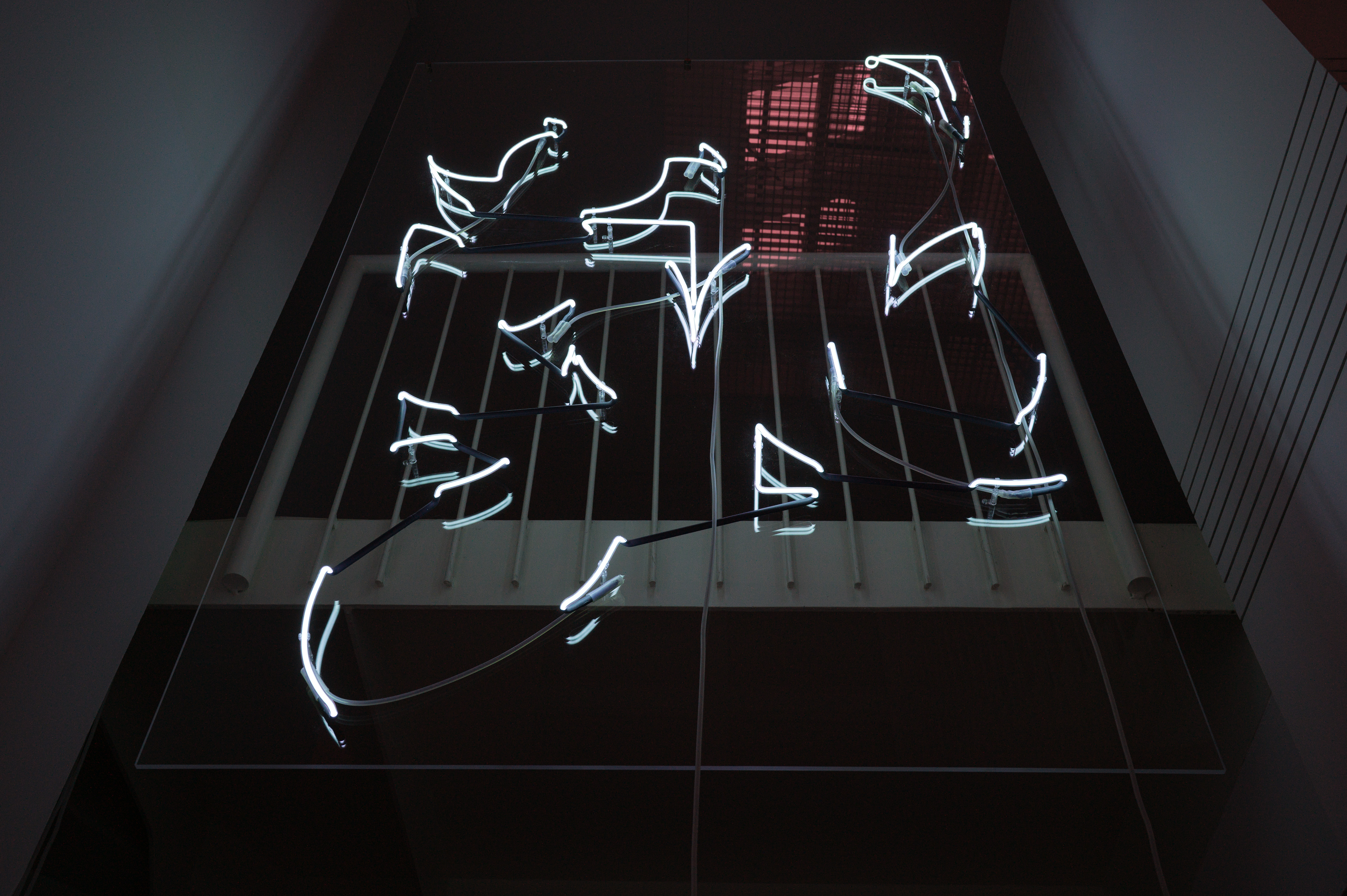 Looking at your work, one of the things that strikes me is this preoccupation you have with legibility and erasure, specifically in your pieces for the Robert Schuman Kunstpreis, Write about my piece (2021) and Cross me (2021). Can you speak a bit more about these two works?

The starting point for these works were badly done graffiti buffs (the act of removing graffiti or painting over it), so you can see that something’s been written, but you can’t actually read it. It’s similar to what Jean-Michel Basquiat did in his paintings; he wrote words and then crossed them out, which made them more meaningful. By taking something away you give it more power.

For the neon Write about my piece I used a typography that I created for the group exhibition BRAVENEWWORLDORDER at the Casino Luxembourg. I got the line from an art critic and was trying to figure out how to do a neon sign without it coming across as cheesy. I figured I could use the same methods I use in my other projects – I often put something on a tile, add to it, then remove it again. Problem is, you can’t buff a neon sign. So I erased parts of it on Photoshop instead. It was also kind of out of my hands at one point because I didn’t produce the neon glass myself. The way the producer connected all the tubes was quite interesting. It played into the legibility of it all – normally you’d read from left to right, but the dark and shiny parts of the neon aren’t actually connected in linear fashion. I also like how the piece subverts the conventional function of neon signs, they’re usually there to signal something. Here, I’ve created something pretty expensive and flashy that has no purpose at all (laughs).

Same for the Cross me piece. I used tape used on crosswalks and roads to guide people past construction sites. I found it interesting that after a week or so, the tape starts peeling off or gets ripped, so it doesn’t point in the direction it’s supposed to anymore and ultimately doesn’t really serve its purpose. The piece I made was in the basement of the exhibition space. It’s funny because the tape makes even less sense inside, in a space where there’s only one way in and out. At the opening, visitors weren’t sure if they were allowed to step on the work, which is kind of funny since the work is called Cross me and is made of the exact same material used on roads (laughs). 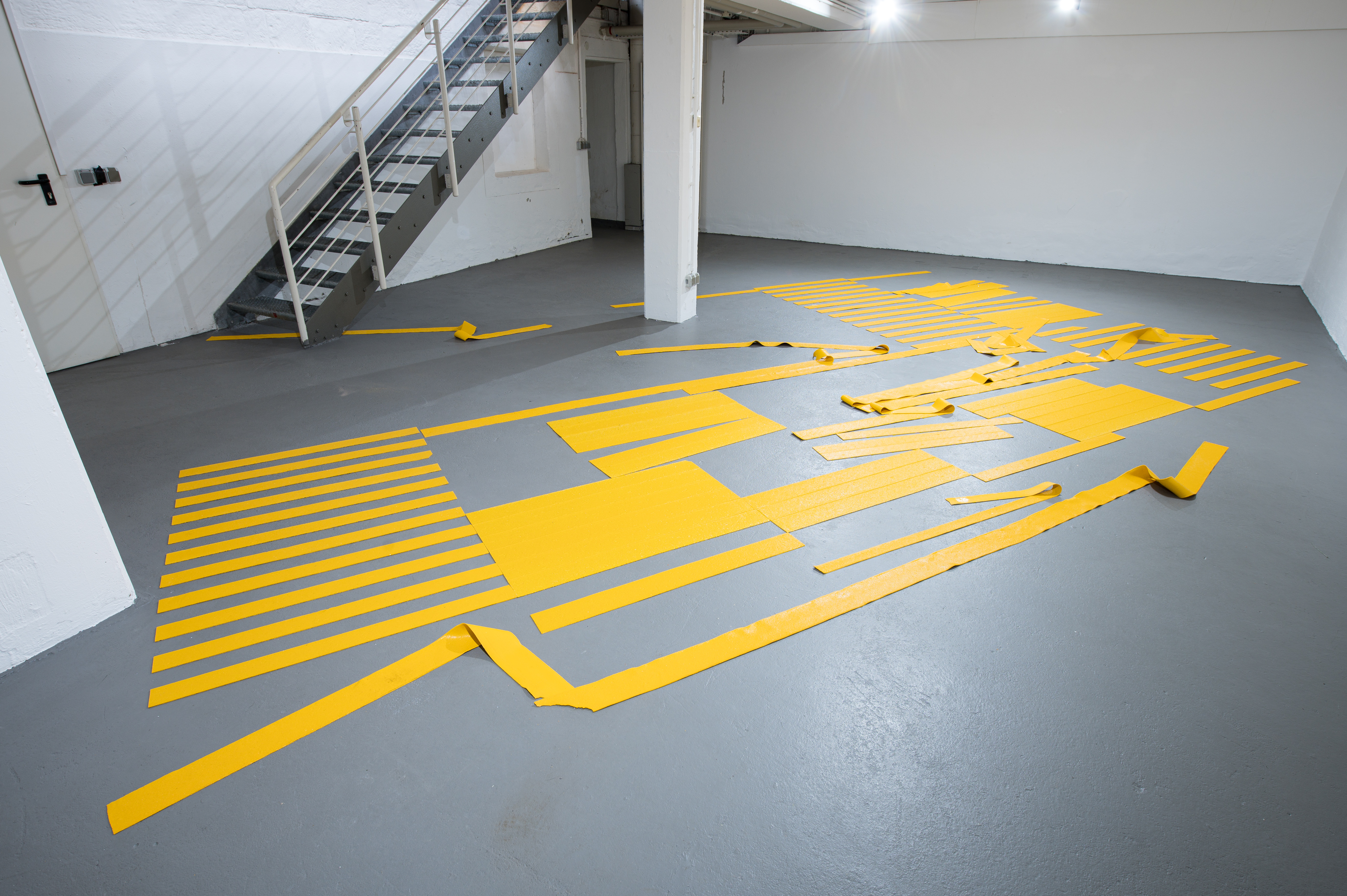 Yes, you often make the functional non-functional and strip very practical objects of their original purpose, it’s very Duchampian in a way. Can you talk us through your process here?

Stripping an object of its function comes quite naturally to me since I work a lot with construction materials. When I see something at a construction site which I feel has aesthetic value or an interesting composition, I try to recreate it in the studio with similar, or indeed the same materials. By stripping the original context and giving it a new context I automatically remove the objects’ utility.

I have to ask – have you ever had a bizarre call with a construction company when sourcing materials for your pieces?

I’m sure there’s going to be one of those in the near future (laughs). I have had really weird exchanges with Hornbach, though. I was ordering metal sheets for a project and they just weren’t arriving and I was on a deadline. So I called the hardware store and they put me in touch with the company that was producing the metal sheets. The phone number looked really fishy, though, so I looked it up and it was some sex call center in Düsseldorf (laughs). I ended up sending an angry email to the company and the sheets were delivered two days later. 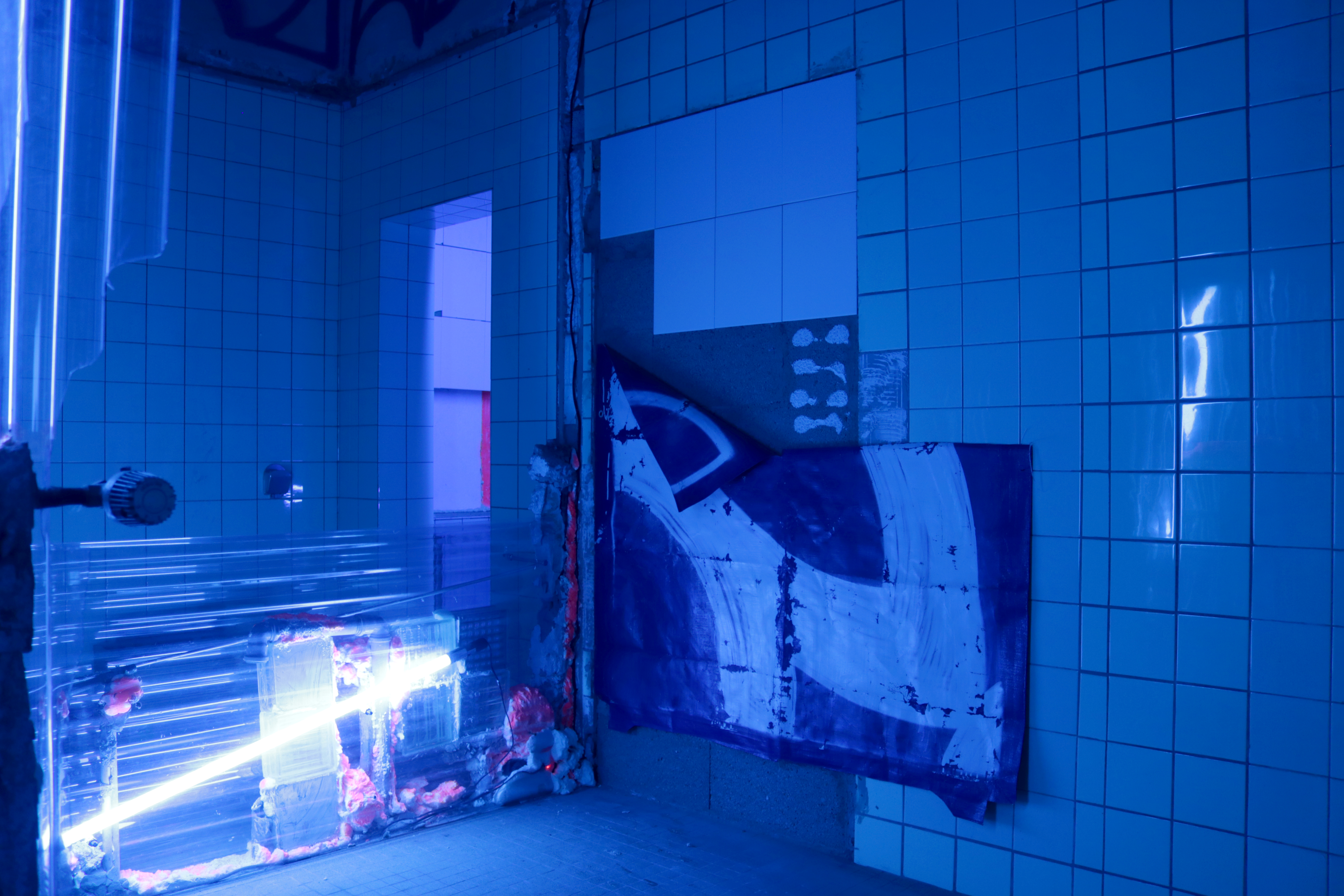 You don’t only source material from construction companies and hardware stores, though, you also repurpose and recycle your own material in your work. What’s the thinking behind that?

Well it’s a really normal thing to do when you’re at art school because you don’t have a lot of material so you use what’s there, like leftover stuff from other people. You stop doing that at some point because you don’t want to use crappy canvases and frames anymore. Then you start thinking about the materials you want to use for a certain purpose. People often ask me if there’s a green aspect to my repurposing materials but that’s not really it, I’m analysing how the material is treated. Things like tarps are always reused at construction sites, for example, and each time the constellation is slightly different, like accidental compositions.

I have a Fundus of materials that I find aesthetically interesting like ceramic tiles and tarps that I can build different things from. If I use a material for one work I can’t use it in another, I like that side of it. People don’t always get it because you’re supposed to be able to buy things at a gallery. When I show something in a gallery it’s the final version for that space. But once the show is over it goes back into inventory. The possibilities are infinite. If someone were to buy a piece, they get the concept of it. It would be a different state of the piece, the same materials but adapted to the space the person wants to exhibit the work in.

You don’t often work on canvas, which is why it’d be interesting to hear about one of the rare exceptions to that rule. Can you speak about your Red can, black bull series?

Yeah, it’s something I wanted to do for a while. It’s obviously a play on Jupiler beer. The backstory is that when I was in Luxembourg I used to work a lot with Rafael Springer and since that’s the only beer he drinks I started drinking it too (laughs). I thought it’d be interesting to do something with the beer can, to connect it to the spray can in some way. One thing they have in common is that you crush them once you’re done. You slash the spray can and step on it.

So I did these large-scale canvases where I approached painting in a different way. The background is acrylic paint, but the rest is spray paint. Whilst I was waiting for the canvases to dry in between sessions I developed a separate body of work, small formats and sculptures. I created a metal grid with all the cans I used in it and some big sculptures made from metal sheets. 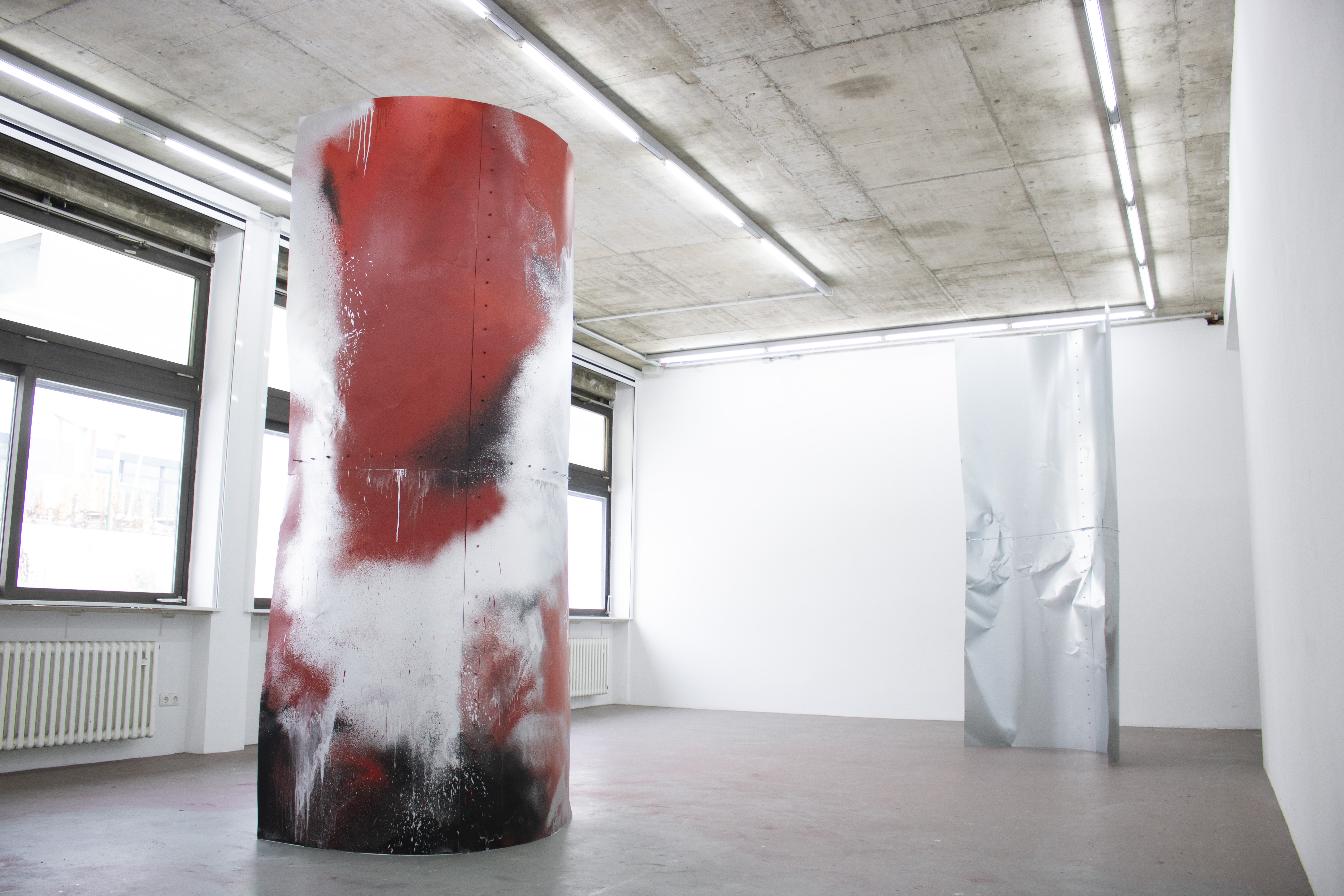 What projects have you got coming up next?

I have work on show at the Metzeschmelz exhibition in Esch-Schifflange. Then in May I’m part of an exhibition at the Kunstverein Frankfurt, I’m doing a buff performance with some people from Offenbach. One group will be tagging on the walls of the Kunstverein and the other will go around and paint over it. Then in early June I’ll be showing work with my classmates from Kunsthochschule Mainz at the TUFA Trier & Künstlerhaus Bethanien in Berlin. I will also be a part of a nice group show at Reuter Bausch this summer.

How do see your practice developing in the next years?

Well, I’m planning on changing university soon and study in a class that’s more space-specific. At the moment I’m studying expanded painting, but I’d like to get more into site-specific work. I feel it’s always has been a strong suit of mine and my pieces work well in these environments. So less painting really, there’s enough of that out there already! 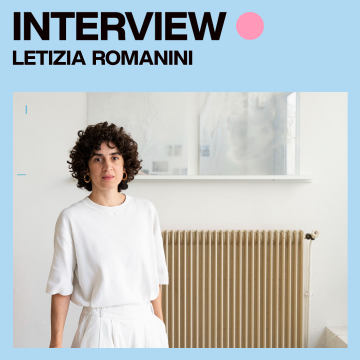 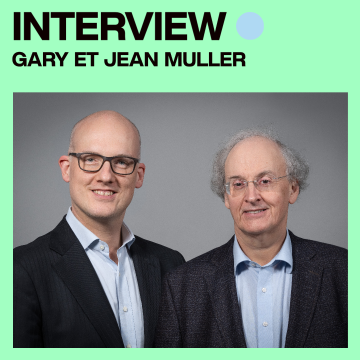 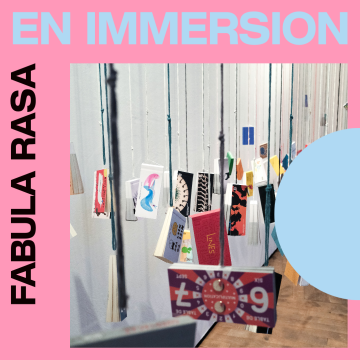