Skateboarding is many things. It is a sport, even an Olympic one. It is an industry with a massive following, allowing a select few practitioners to lead a rockstar-like lifestyles. It is a culture, weirdly both a subculture and part of the mainstream. It is also a community. From the 8-10th of July, both the local and international community gathered around Kirchberg’s Philharmonie for a three-day mayhem session called LXB Street.

Successor to two pre-pandemic LXB Cup editions, LXB Street offers a dozen stands with food, clothing, art and Tony Hawk video games on display. The designated contest area features added skatepark modules, ramps, kickers and rails. It is demarcated by guardrails behind which spectators applaud mind-shattering foot wizardry. Whereas skateboards have changed little since their inception – the switch from clay to urethane wheels in 1972 and the standardization of symmetrical board shapes in 1989 are still regarded as the most ground-breaking changes – what people do on skateboards nowadays would make first-generation surfer-skaters paddle into the sea and never come back. 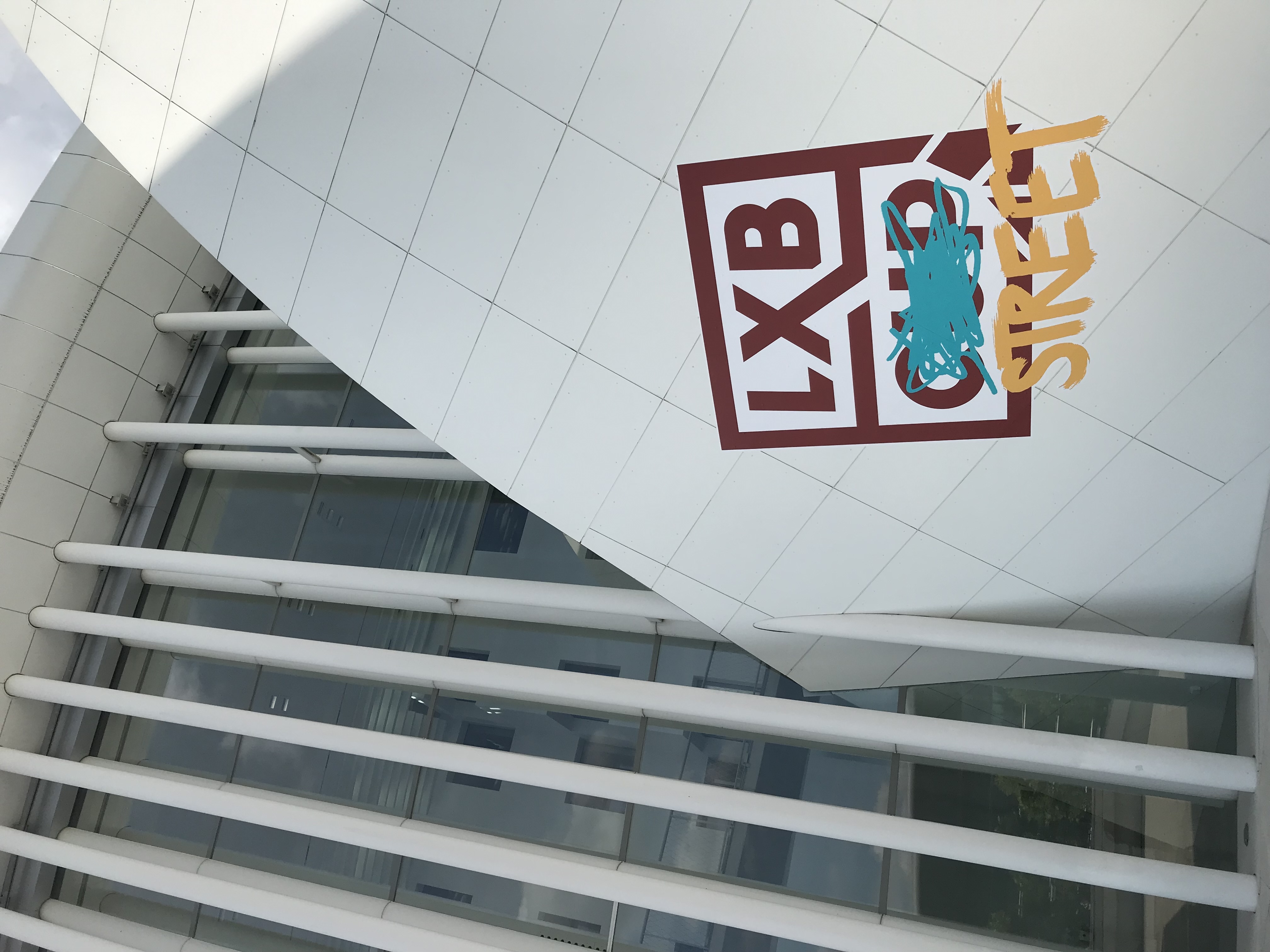 Last but not least, skateboarding is a way of looking at the world. In order to gain an insight into that dimension, I approach Ornello Haan. Whereas first place went to Bulgarian Martin Atanasov, Ornello Haan is, being twenty-fifth, the highest-ranking Luxembourger.

We escape the contest area’s hubbub and sit down in front of the European Convention Center. As we talk, we watch rider Reece Knobloch throw himself down the massive thirteen-stair set that leads up to the center, over and over again, until he manages to land his trick. He rolls away to the applause of a few bystanding skateboarders. Whereas many people would wonder why Reece would skate the center when the contest area is just meters away, skateboarders understand that skateboarding cannot be confined to designated areas. Perhaps, similarly, as Ornello’s answers suggest, skateboarding cannot be adequately expressed within the confines of language. 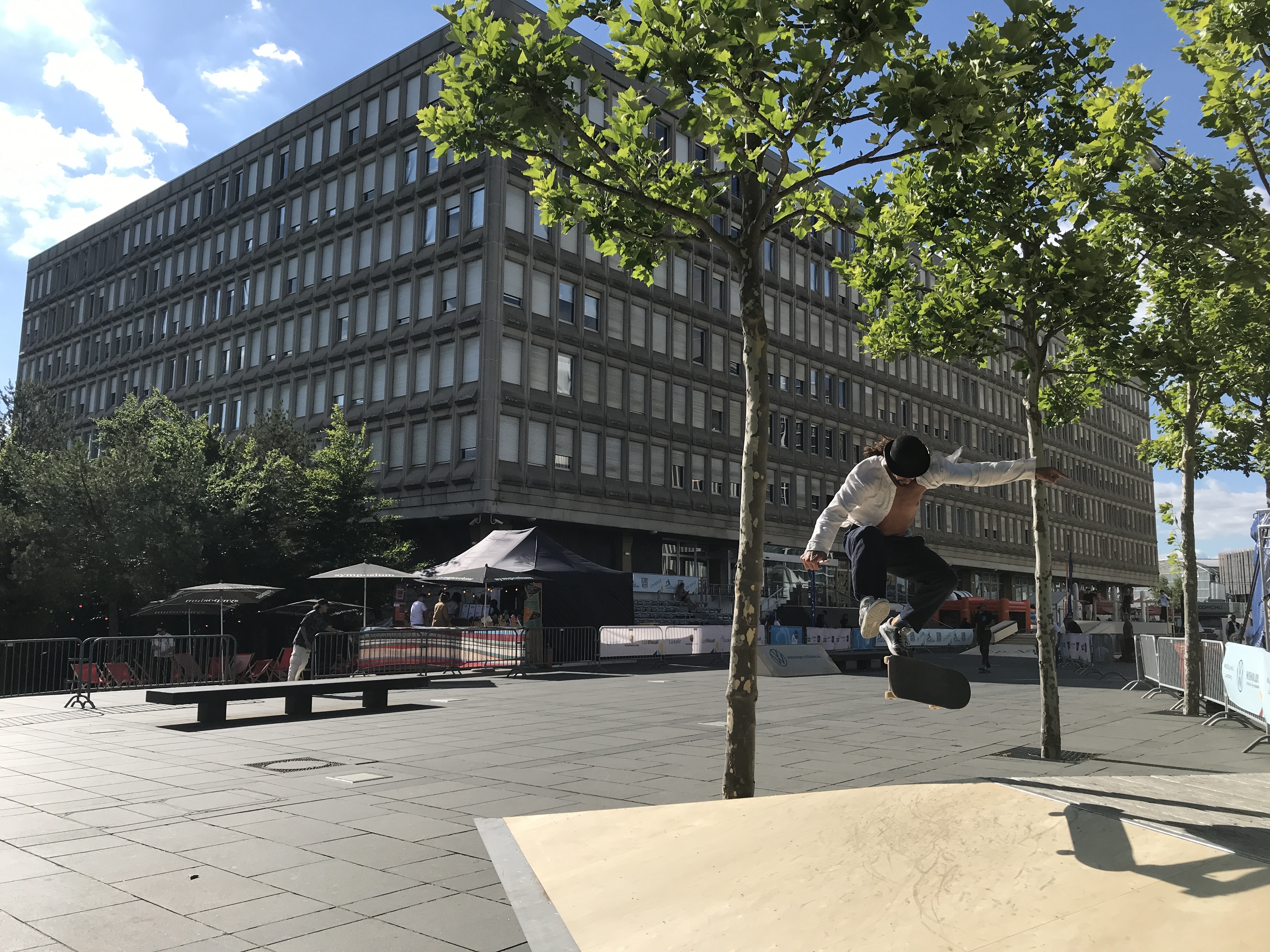 A little birdie told me that some of the skaters have been preparing their runs for weeks, perhaps months. Can you tell me the extent of the preparation involved in your run?

Preparation? For a run? (Laughs) Some people’s preparation is limited to looking at the site. They may look up pictures and videos of the skatepark they’re about to compete in and go through a run in their head. Most often, skaters arrive a day or two before the event and get used to the terrain. I don’t prepare myself at all. I just show up at the contest and see what I can do. I’ll check out the modules during warmup runs and figure out which tricks fit them.

There’s a million-euro-skatepark down in Péitrusse. LXB Cup has been hosted there two times and yet we are at Philharmonie. Why are we here?

Both LXB Cup contests were at skatepark Péitrusse, that is true, but the Péitrusse valley is now a huge construction site. They want the Péitrusse river to flow more naturally. It’s impossible to host, say two thousand people at the skatepark there right now. So the LXB Cup committee came with the idea of blending a street plaza with park modules. Philharmonie is a good spot, that’s internationally acknowledged. So they renamed LXB Cup to LXB Street. This is just happening this year. As soon as the constructions are over, the event will be back at Péitrusse skatepark.

Is the competition street or park skateboarding?

We can argue about semantics but let’s say it like this: it’s neither all park nor all street. It’s more of a hybrid. 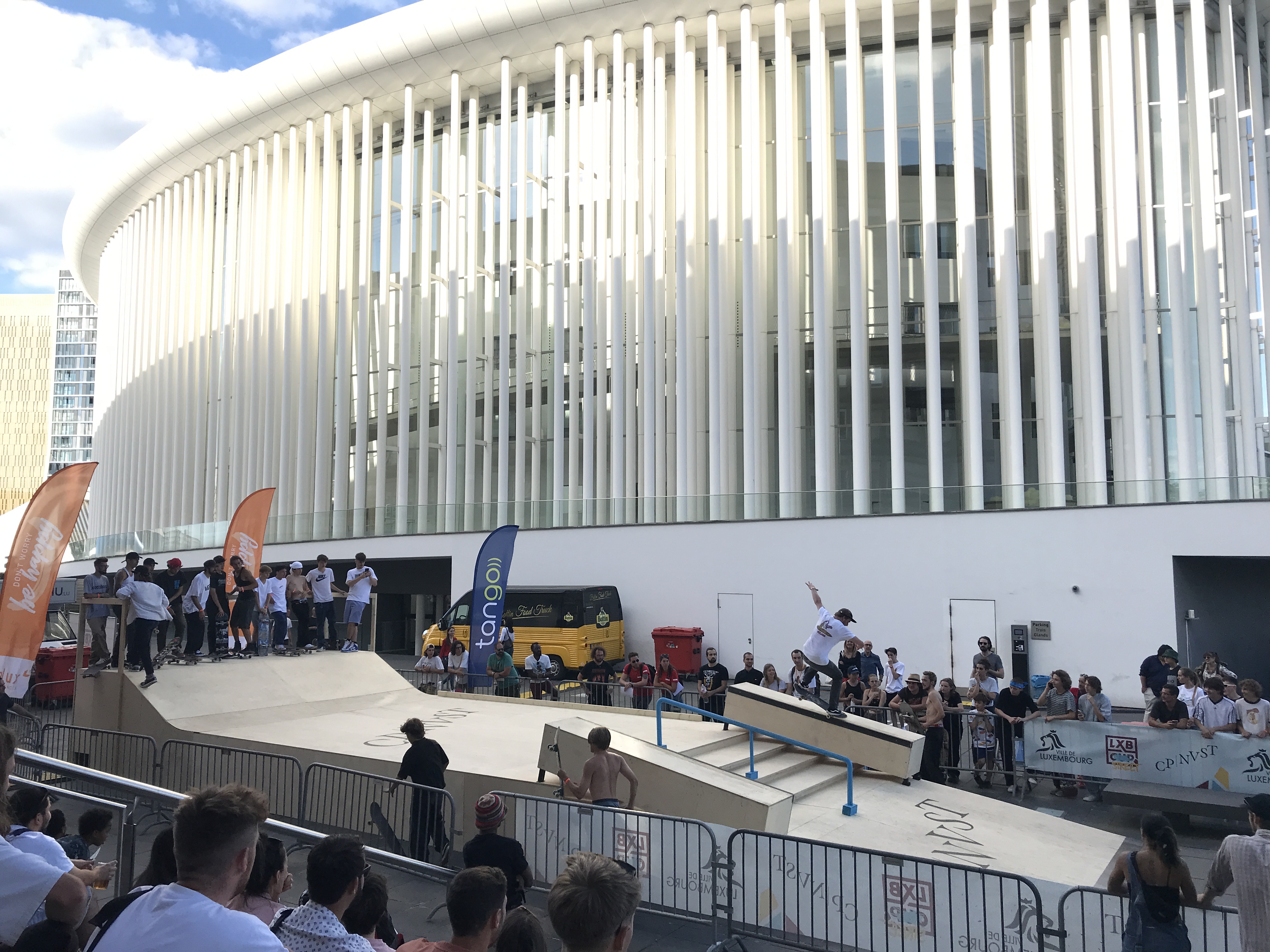 How satisfying is it to land the tricks you wanted to land, and how frustrating is it not to manage?

That’s very hard to say. I’m not sure if ‘satisfying’ is the right word. I get hyped when I land a trick. This type of hype is hard to describe to people who do not skate. It just makes me happy. These tricks, you try them 120 000 times. If you land a complicated trick and you land it clean, of course you’ll go: ‘wow, let’s go, fire it up.’ It’s hard to describe. It’s probably different for everybody.

What if you don’t manage?

Then I’ll learn something out of it. I’ll wonder what I did wrong. Did I really need to slam this hard? If you don’t manage, you don’t manage. Life goes on. The past is in the past.

Did you ever have no fun skateboarding?

Yes. It’s happened a couple of times. But that’s just like life. I mean, life is a rollercoaster. Sometimes it goes up, sometimes it goes down. Sometimes you’re happy, sometimes you’re sad and frustrated. It’s the same with skating. You’ll have days during which nothing works out and your body might say: ‘no, not today.’ Maybe you’re overthinking or your muscles are sore or you have a hangover. There are many factors that can make it not fun. If you haven’t had fun skateboarding in years, though, then I’m sorry for you. Then maybe it’s best you look for another hobby that’s going to be more fun in the long term.

To the many people who see you guys skate for the first time today, it looks like you have no fear.

To the people watching today, it’s probably the first time they see a skate contest in Luxembourg after the pandemic. To many people, it’s the first time they see skateboarding at all. It’s entertainment, just like all other sports, football, basketball, tennis, you name it. Even if many skaters say skating is not a sport, it’s art, it’s a lifestyle, it’s still sport in the end. We do physical activities with a piece of wood. It’s an Olympic sport. To skate a contest again, it’s like skating any other contest, whether that’s local or international. The concept is just a little different. This makes it a bit more interesting compared to a traditional skate contest like Tampa Pro or Street League. 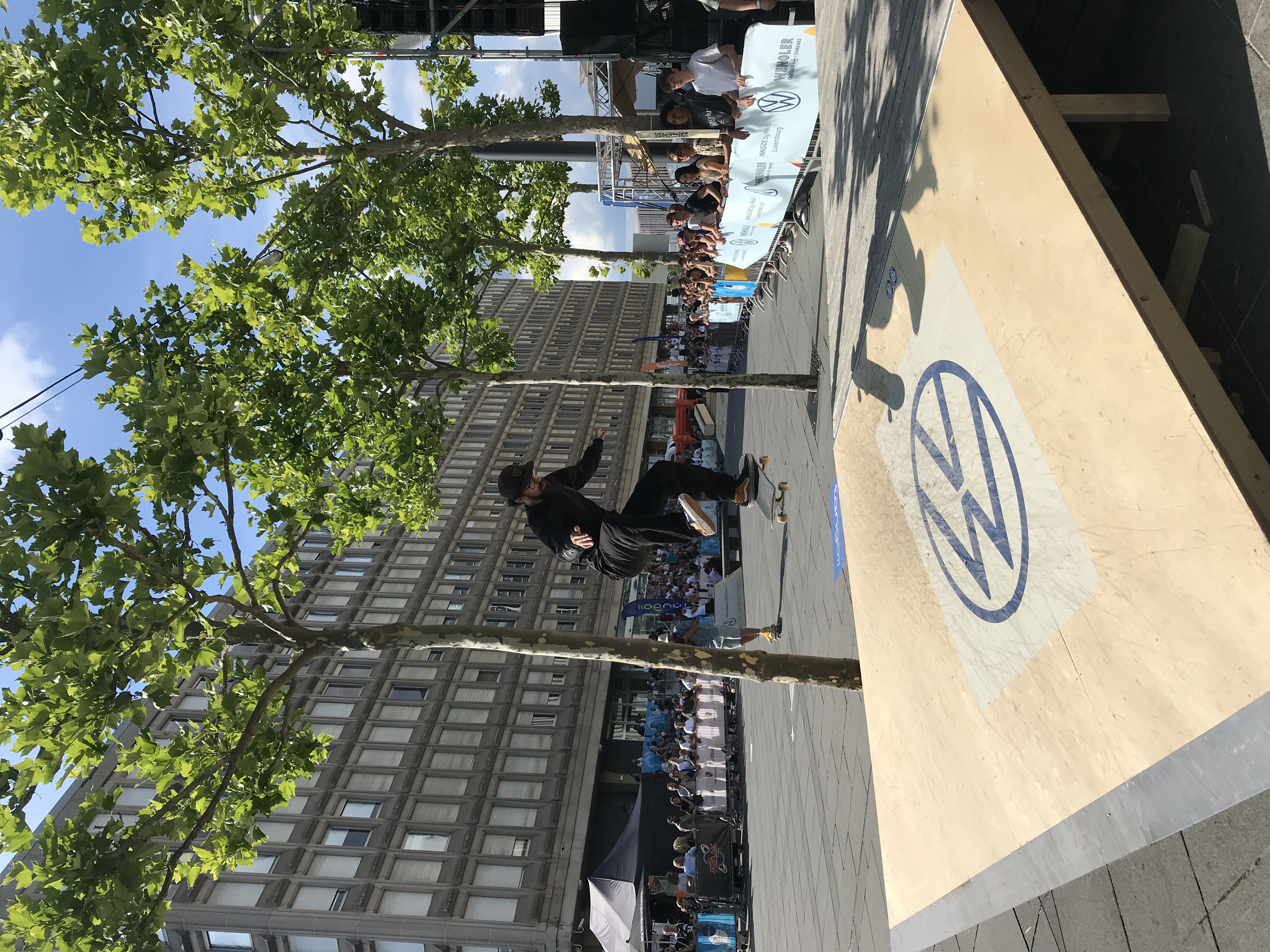 Do you remember what made you want to skateboard in the first place?

I started skateboarding because of a video game: Tony Hawk’s Pro Skater 3. I had it on the PC. I started the game and I saw this clip of pro skaters doing their thing and what they did bedazzled me. I wanted to do that too. I grabbed a skate and tried to copy what they did. I invested years in this. Just like with all other sports, when you put the time in, when you train, you get better at it and more trick possibilities open up to you.

Skateboarders see their environment differently from other pedestrians.

Yes. That’s the thing with skateboarding. When you start skateboarding, it’s as if your environment transforms. This transition is a part of skateboarding because you use your environment to skateboard. Other people don’t do that. They see stairs, ledges, whatever, they just see asphalt and that’s it. They can’t do much with it. Us skateboarders, we try to skate everything that can be skated. That’s what I always say: your local skatepark isn’t the end of it. The entire world is your skatepark. You can skate everywhere, except for the sea. That’s why we have surfboards. The architecture of some cities was designed for us skaters to skate. There are architects who actually think of pedestrians as well as skateboarders when they work on public places. Take a normal bench. We skate it, and people can sit on it. Stairs, we jump down or up them. Other people walk up or down them. It’s very hard to describe what goes on behind the eye of a skateboarder.

What do you see through your skate-eye when you look at Philharmonie?

Philharmonie is a spot here in Luxembourg that’s, thank god, very cool, architecturally and all. It’s very modern. They thought of skateboarders. It’s one of the best spots in Luxembourg. We have MACBA in Barcelona, we have the dome and the Hôtel de Ville in Paris and we have Philharmonie in Luxembourg. They are all internationally appreciated skate spots.

Is there anything else you want to add?

Thank you for the interview, Nicolas. I’m always happy to talk from skateboarder to skateboarder and to, if not describe our reality, then tell of it. I hope that some people grab a board and try to skate… because it can change the way you look at the world, to flip it upside down. The freedom you can chase and sometimes capture is indescribable. It’s not like football. You don’t have a training schedule, you don’t have a coach, you don’t have to work with a team. No, with skateboarding, you can do what you want where you want when you want. You can dress how you want. You make your own rules. I hope more people get to experience that. Even if you just try it and stop after a while, at least you’ve skated and you can say: ‘yes, I know how to skateboard.’ Knowing how to skateboard does not mean you have to know how to do the most complicated tricks. It just means you know how to roll. You know how to roll down a bit of a hill or at the Cactus parking and you have fun doing so. To have fun, that’s the most important thing.

Ornello Haan at Philharmonie in 2014