We met up with the young visual artist João Freitas (1989) to talk about his practice, his current solo show Unshielded at La Patinoire Royale | Galerie Valérie Bach in Brussels and his collective Muesli. The Brussels-based artist has shown work in group exhibitions in Belgium, Luxembourg and Italy. His latest solo shows include Heimat at Centre Tour à Plomb in Brussels (2020), In the open at Centre d’art Dominique Lang in Dudelange (2020) and Frühlingsstimmen in Chapelle de Boondael in Brussels (2019).

João, can you introduce yourself and tell us about your studies at the Ecole nationale supérieure des arts visuels de La Cambre (ENSAV La Cambre) and how your work has evolved since then.

I was born in Portugal, grew up in Luxembourg and moved to Brussels back in 2009 to study drawing at the ENSAV La Cambre. During my studies I was questioning what drawing meant to me, not just the act of drawing but everything that goes with the practice. I felt a bit frustrated, I think I had a naïve approach to drawing and art itself as I didn’t study art history or have a background in art. At some point I began to shift my practice from creating works on paper to putting paper to work. I focused more on the gestures that go with frustration, like crumpling up or tearing paper and how this affected the surface I was working with. I took this as the starting point for my Master’s project. Since then I have become more interested in the question of materiality. I try to take drawing out of its two-dimensional context and consider paper and other found materials as surfaces to work with instead of just on.

Why did you decide to stay in Brussels after you finished your studies back in 2014?

There are a lot of opportunities for young artists in Brussels. After finishing my Master’s I got accepted onto a 1-year residency programme at La Fondation du Carrefour des arts. I had a studio, a small budget to produce works and the opportunity to present them in an exhibition. That was a big motivation for me to stay in Brussels. That same year I also realised I needed a side job to make a living so it was very natural for me to stay here. I like Brussels and have created a network here. I don’t really want to leave that behind.

You currently have a solo show at La Patinoire Royale | Galerie Valérie Bach in Brussels. In your exhibition entitled Unshielded you present a series of works for which you’ve used different kinds of found materials such as magazine and book covers, Tetra Pak and old posters. By peeling, scratching, heating, stripping and tearing them you reveal the hidden side of these materials. What motivates you to work with ordinary objects? How do you get a hold of them and how do you decide what to do with them?

I find a lot of my materials on the street, at construction sites or on trips. I don’t actively look for them. When I decide to take something with me it’s because I find the object intriguing or it appeals to me for some reason. Most of the materials that I collect are rubbish. I collect these materials in my studio and my apartment but don’t immediately know what to do with them. Some of them I use straight away and others I forget about and rediscover years later. Sometimes I also use materials that other artists don’t need anymore, or that people give me. I transform them and present them to a public that wouldn’t even notice these materials otherwise. I try to respect the history and composition of the materials I use. I’m not creating anything new, I’m just writing a new chapter for/with them. I don’t erase their past but add something to it instead.

In these past few years I’ve built up a vocabulary of gestures, processes and different materials. It’s important for me to work with the material according to its properties. The process I choose varies depending on its composition. There’s no specific idea from the start. It’s very intuitive. I try things out and see how the material reacts. Often I find the right process by chance.

Take the works that I created with Tetra Pak. I started with the facts. I knew that Tetra Pak is made of aluminium, paperboard, polyethylene and that it’s made to isolate the product inside of it and protect it against heat. So I thought about ways of getting rid of the outside layer. It became clear to me that I had to use heat. I first worked on the outside but it didn’t feel right. I then decided to turn it around instead and work on the back side and adapt the distance between the surface and the welding torch. 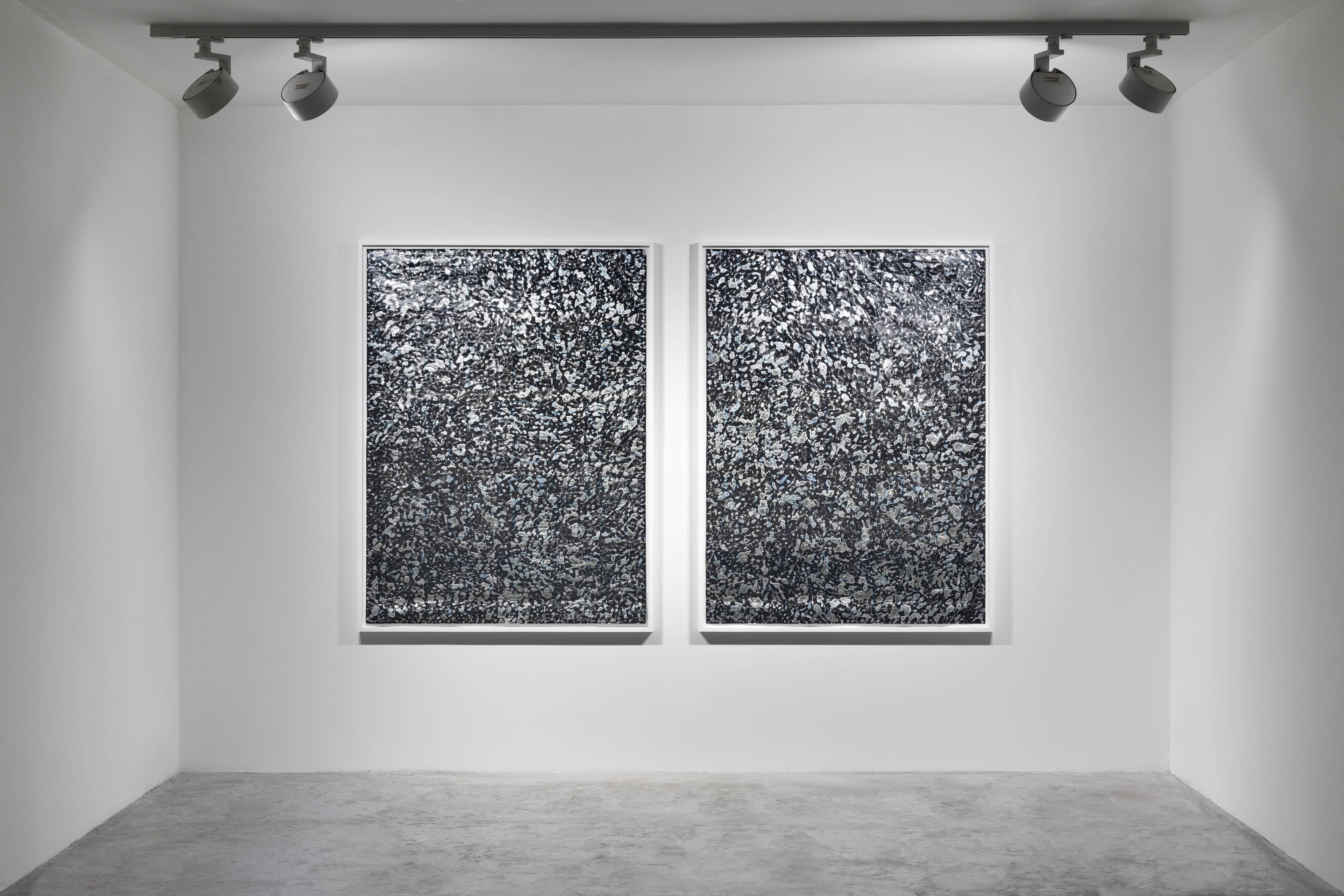 Or take the poster works. During the pandemic I always passed by the same billboard on my way to the studio. The posters on the billboard were glued one on top of another. As time went on they became quite heavy and started peeling off. One day after a storm part of it just fell off. The front of the poster was varnished so it was water resistant but the back side of it absorbed the rain. I picked it up and took it with me to the studio. When I had to leave the studio I decided to tear it into pieces for practical reasons. I never thought that I’d use the pieces as they were for a work series. Later on, though, I used an etching needle and the drypoint technique on the blue-back side of the poster, which made it look woolly instead of flat and revealed the white layer between the front and the back side of the poster. 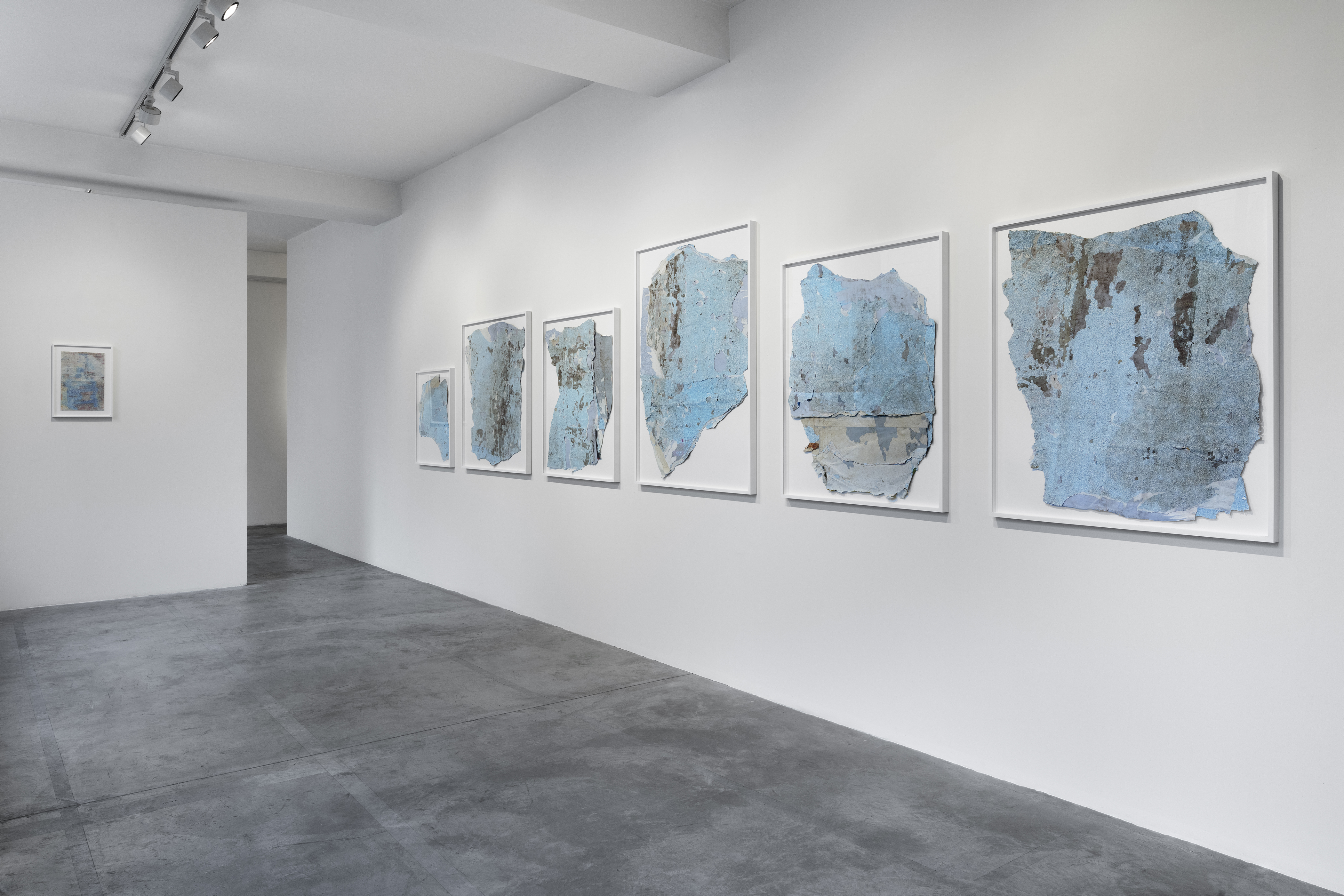 What’s it like altering the surface of these materials and how do you decide when a work is finished?

When it’s a new material that I haven’t worked with before or if I’m trying out a technique for the first time, I often have a moment of doubt. But as soon as I feel that it’s working and that the material reacts the way I want it to, I’m so happy, like I’m discovering something new. I don’t have a specific way of knowing when a work is finished, it really depends. Sometimes I try to set clear goals. For example I have a few works where I decided to remove the entire first layer to reveal the hidden surface beneath.

Can you explain the title of your exhibition?

I thought Unshielded was a good exhibition title for the works that I’m presenting in the show. It means to be unprotected and it also has the word shield in it which you would use for a fight. To create the artworks on show I have removed a layer of the materials in order to reveal a hidden side to them. It makes them vulnerable. The visitors of the exhibition are invited to consider these framed everyday objects that they normally not pay any attention to. I try to give them a voice. 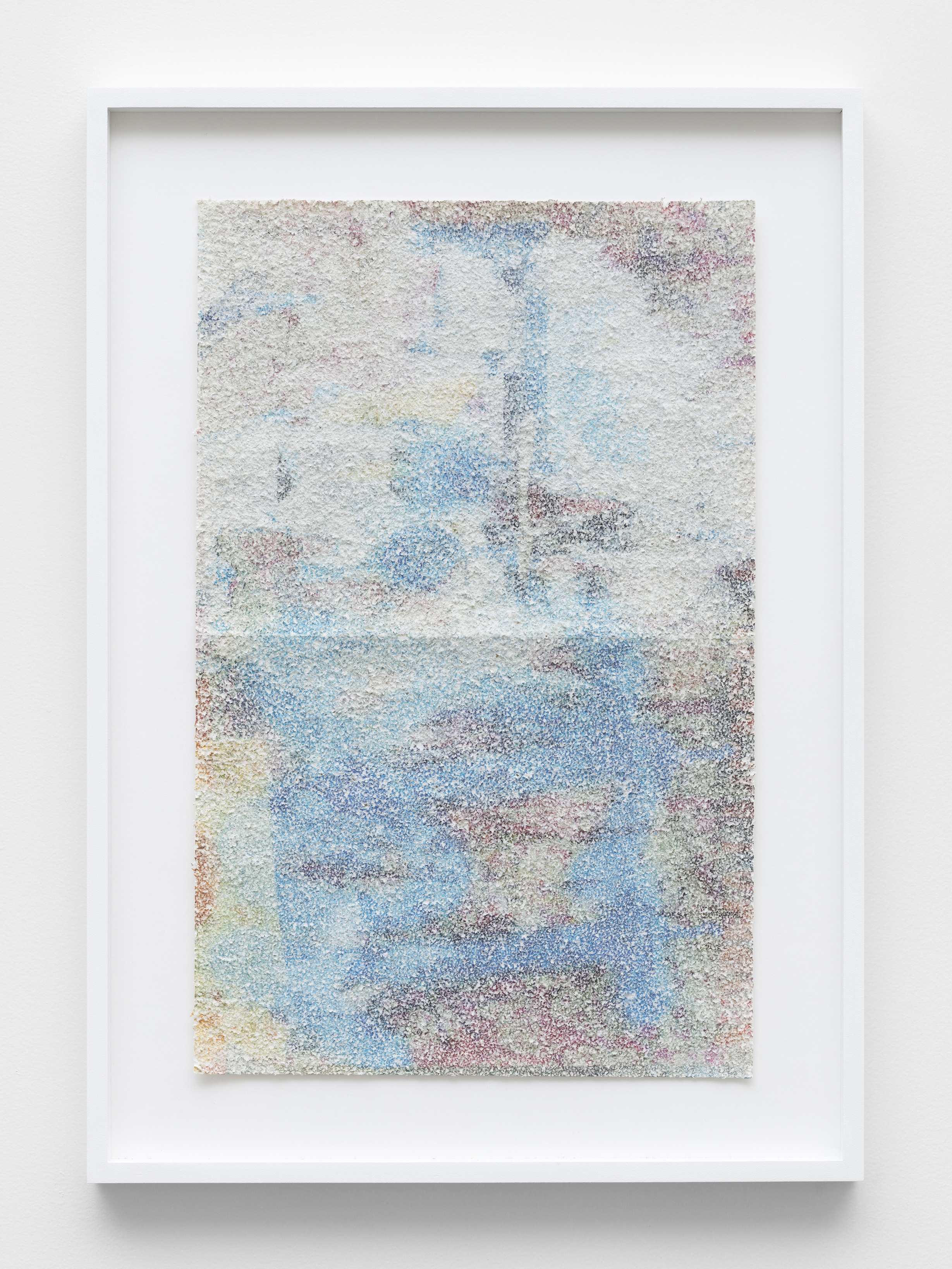 You also formed an artist collective with two of your former classmates from the ENSAV La Cambre, Louis Darcel and Hannah de Corte. You have a 2-year studio residency at KULT XL ateliers. The work you create is a lot about materiality, chemical reactions and experimentation. Can you tell us more about the collective?

During my studies at the ENSAV La Cambre I worked on several projects with my classmates Hannah and Louis. Two of these projects were voluntary group projects at two different hospitals in Brussels. The idea was to bring art into a space that isn’t designed to show art. From then on, we decided to keep working together outside of the university in order to be free to do what we want. Together you can achieve so much more. You think differently and each person brings their own input and different perspectives. 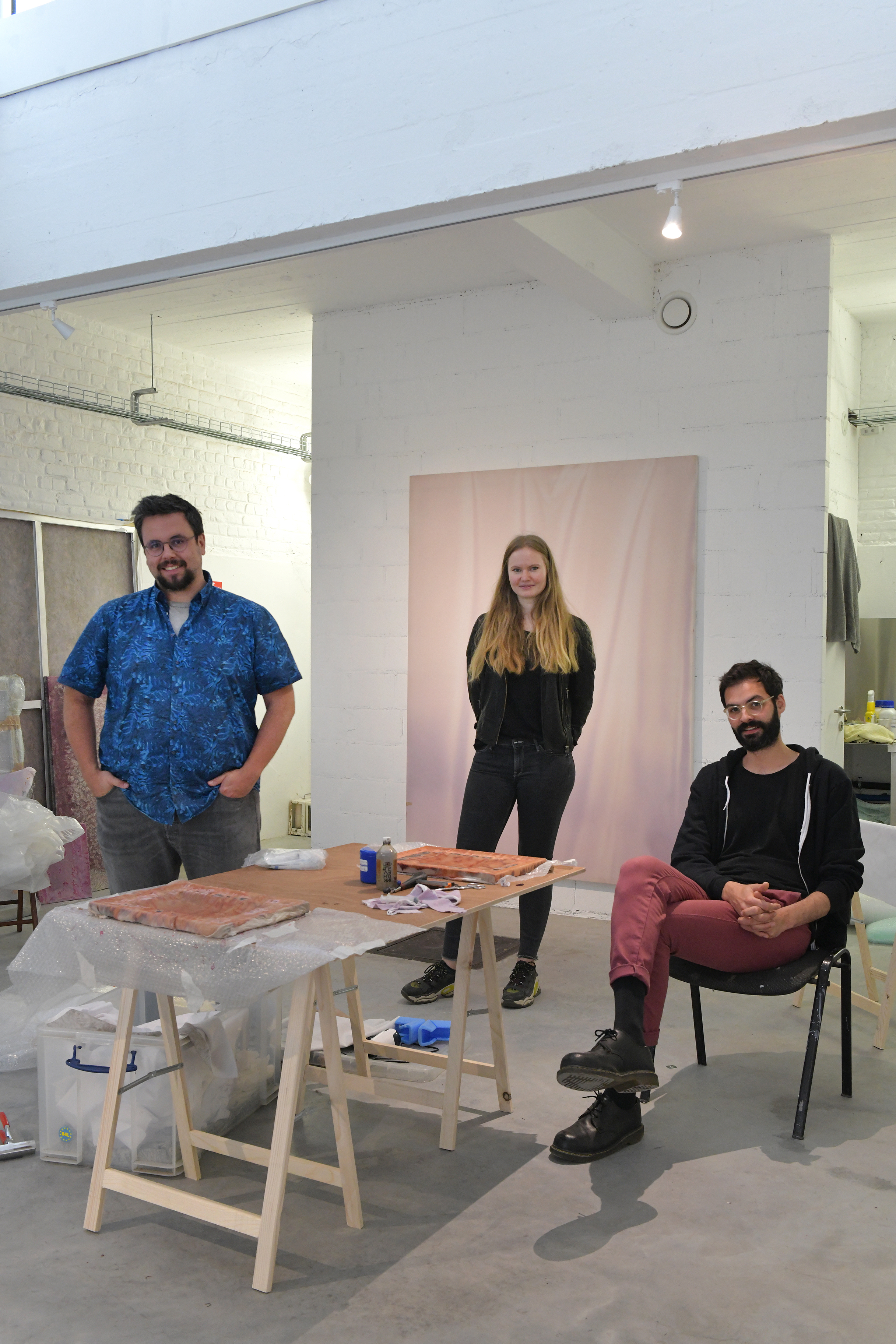 We work with sensitive materials and create artworks that constantly change and react to the environment that they are exhibited in. We use chemical indicators on different types of canvases to create our work. These paintings react differently depending on the type of fabric (silk, cotton, etc) and the inner frame (wood, metal, etc) that we use for the canvas and depending on the environmental conditions (humidity, temperature, pollution, UV rays). The colour and patterns change depending on these factors. We have no direct influence over the outcome. We collaborate with scientists and chemists to study all kind of materials and their reactions. Our long-term project is to create a work that reacts to all environmental factors that aren’t visible to the eye, which causes it to change constantly without using any technology.

We each have our own artistic practice which informs our work in the collective and vice versa. The name of our collective, Muesli, came from the idea that we’re three people from different countries and with distinct personalities, just like muesli mixes different ingredients together to create something better. 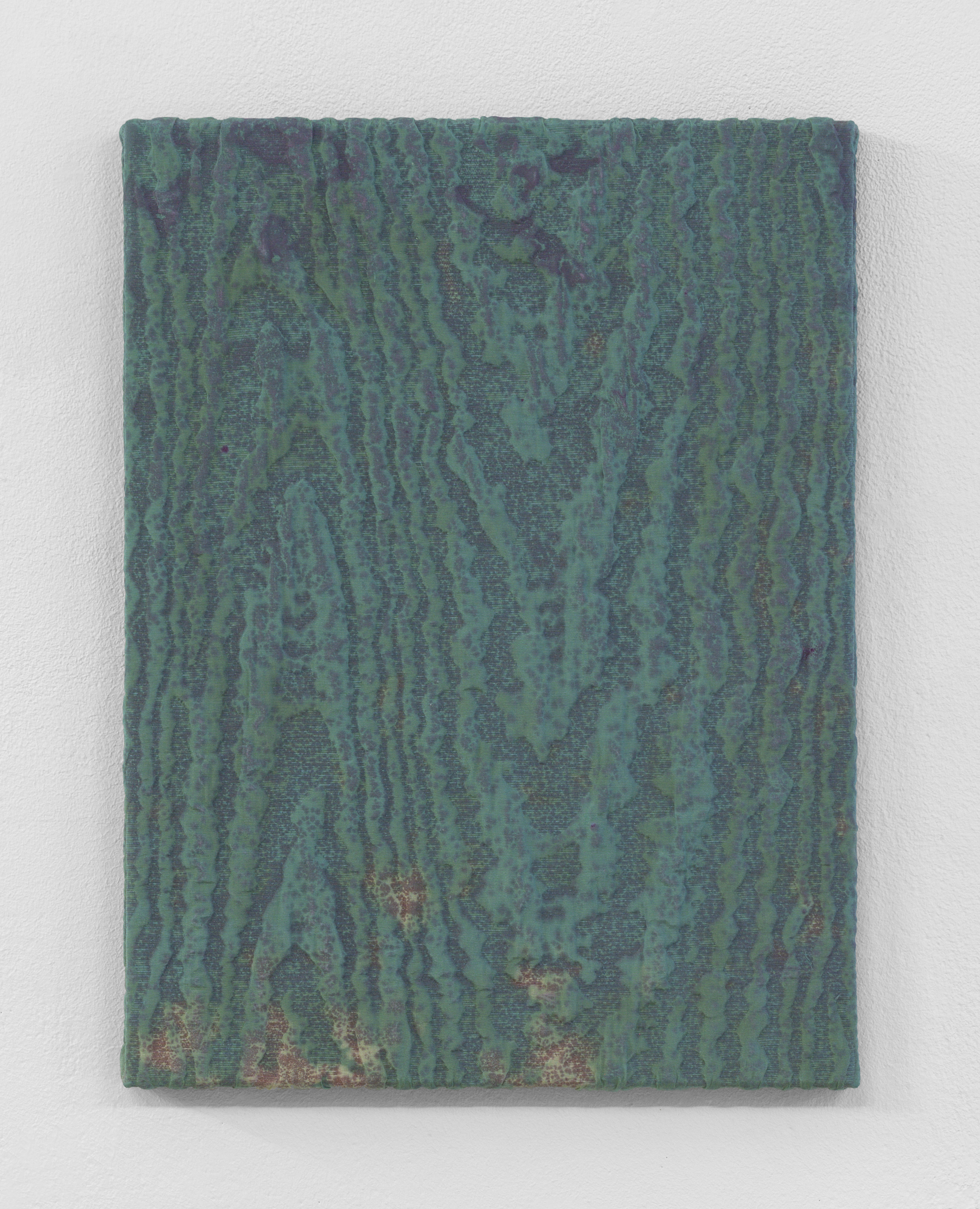 Do you have any exciting projects coming up this year?

In April I’ll be showing work in a group exhibition, Dialogues Funèbres, which will be staged in a very unusual space, the Laeken Crypt – a network of underground burial galleries built under the Laeken cemetery in Brussels. And in June I have a solo exhibition at Galleria Fuori Campo’s new gallery space in Siena, Italy. They’ve represented me since 2015. I haven’t seen the gallerists since before the pandemic so it’ll be a nice reunion.

More information on his exhibition here.