Isabelle Marinov: “I could fill a wall with rejections”

For Luxembourg author Isabelle Marinov, 2021 was a breakthrough year in which she published her first two picture books in Luxembourg and abroad. She tells us about turning obsessions into much-loved stories and how perseverance ultimately pays off.

2021 was a huge year: you had two picture books published in several languages. Can you briefly summarise them?

Leo and the Octopus came out in the UK and The Boy Whose Head Was Filled With Stars in the US at the end of January 2021. The latter is a non-fiction picture biography about Edwin Hubble, who discovered the immensity of the universe. He discovered the Milky Way wasn’t the only galaxy and that the universe was actually expanding. What I liked about this was the change of perspective for humankind. You realise you’re a tiny dot in the universe. For biographical picture books you need a theme, you can’t just have the story. You have to have a message. Leo and the Octopus is a fiction picture book about a young boy on the autism spectrum, though I don’t mention the word in the story. I keep it vague because everyone can see themselves in Leo. The octopus he meets at the aquarium teaches him what friendship is. 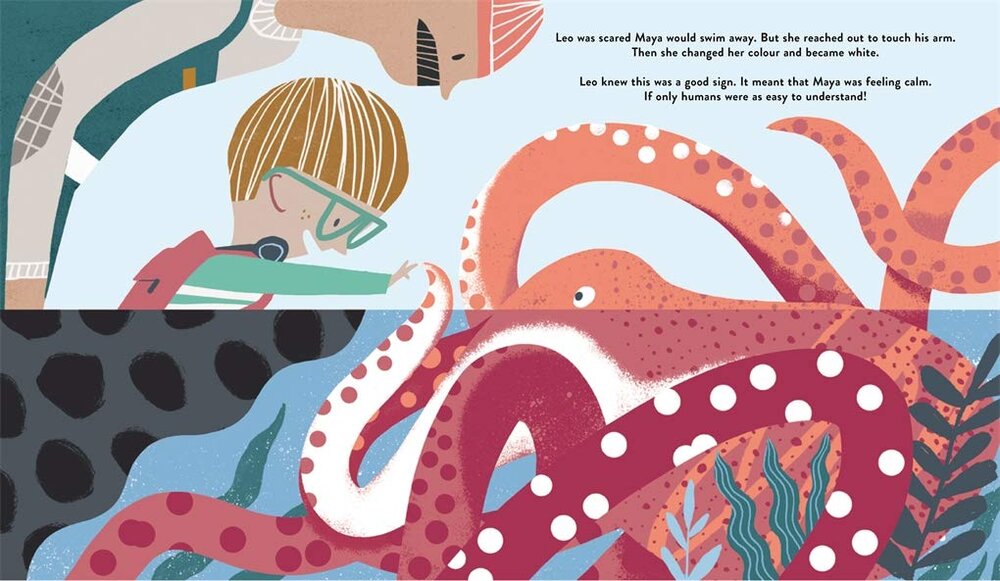 Octopi are quite a trending theme right now with My Octopus Teacher, which won the 2021 Oscar for best documentary. How did you become interested in these creatures?

I wrote the story in 2016 and at that time I was reading these two science books (The Soul of an Octopus by Sy Montgomery and Other Minds: The Octopus and the Evolution of Intelligent Life by Peter Godfrey-Smith), which is why I became fascinated with these animals. The book came out the same year the movie did. And everyone asked if that was what inspired me. But that’s not how picture books are made, it’s a very long process to write and publish a picture book. It was just a lucky coincidence.

Did the documentary give momentum to Leo and the Octopus do you think?

I think it did, because so many people were touched by that movie. I didn't know anything about octopi before I read the science books I mentioned before. Afterwards I thought they were amazing. When I become obsessed with something I tend to think about it a lot and sometimes it connects with other stuff in my mind. Often people ask “Where did you come up with the idea?”. I think it’s not one idea, it’s always things coming together at the right moment. When you feel that spark and can’t stop thinking about it, that’s the start.

You said that Leo is a child on the autism spectrum, although it’s not spelled out in the book. To what extent do you think that autism is underexplored in children’s picture books?

My son is on the spectrum so it’s a topic I’m very interested in. He’s now 12, but when he was younger I was looking for picture books and couldn’t find anything interesting. I think you probably find that kind of thing more in novels. It’s difficult to explore in picture books, because you only have around 800 words. In Leo and the Octopus, the octopus communicates through colour to show emotion. That idea came to me when I was at the hairdresser. I was reading the book while getting my hair coloured. And I thought “Now I have a story!” 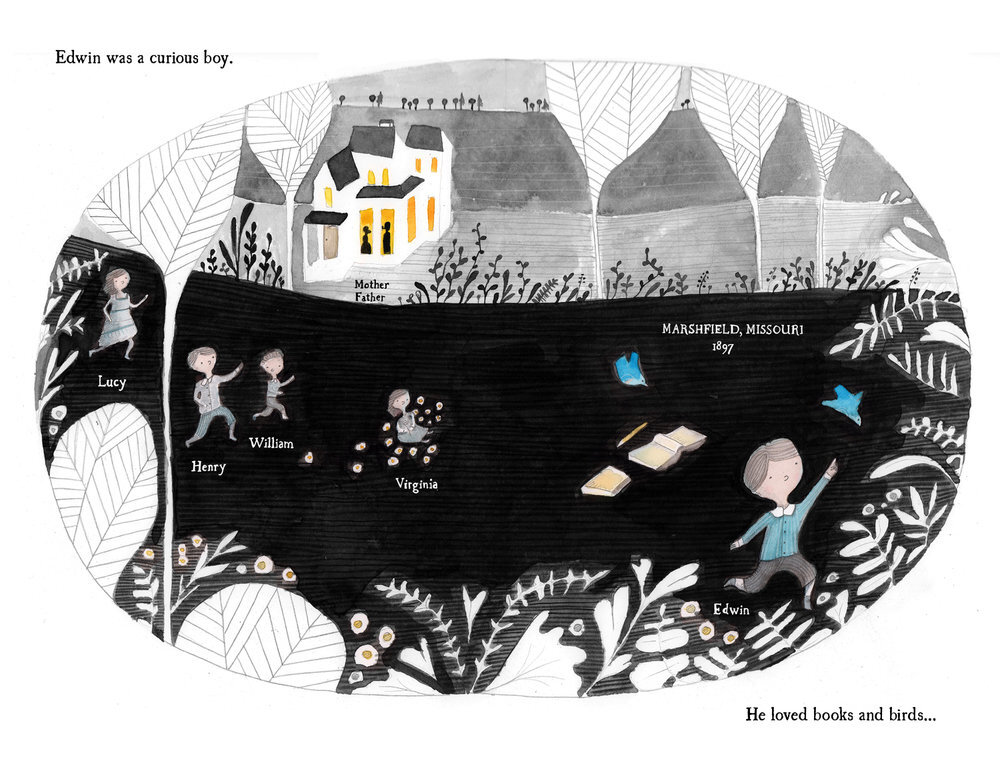 Let’s talk about The Boy Whose Head Was Filled With Stars, which has won several awards including the Eureka! Nonfiction Children’s book award. You told me that the message is that we’re just a tiny speck in the universe. Did you also want to spark an interest in science among young readers?

Yes. From my own school days there wasn’t much taught at school on the history of science. I always wondered why. I did a science baccalaureate at school because I wanted to study medicine. Then I studied law. We had a bit of history of science because I was in that specific class, but other than that we didn't have anything. I think it would be interesting for younger kids to learn about scientists. I think that was in my subconscious as one of the things that motivated me to write the book, because I wanted people to know about Edwin Hubble.

You began writing at the age of 9 when your parents gave you a red typewriter. What was your journey to getting published?

I always had stories in my mind, even if at the time I wrote for myself. Then ten years ago I came up with a plan. I thought if I want to get published I need to focus on one thing. I was writing screenplays and short stories. The idea for the picture book came before I had kids. I like picture books because of the combination of words and images. And I like to write short things, because when you have constraints like telling a story in 800 words, it’s really hard and every word and comma counts. I found that fascinating, so I wanted to try that. I started researching picture books and then I also became interested in middle grade novels, the age span of 9-13. So, I read a lot, I took a lot of online classes, I wrote a lot and got a lot of rejections.

It seems that to break into the US and UK markets, you need an agent. What was your experience?

It took a long time, then finally I found an agent for my middle grade novel in London. She liked it but said we need to make changes to the story. So, we worked on it for half a year. She tried to submit it to publishers, but we also had rejections. Because you get rejections at every stage. I could fill a wall with rejections. And then we found a publisher and they said “We’ll take it”. So, now the story is coming out in October. It was my first manuscript sent to an agent. 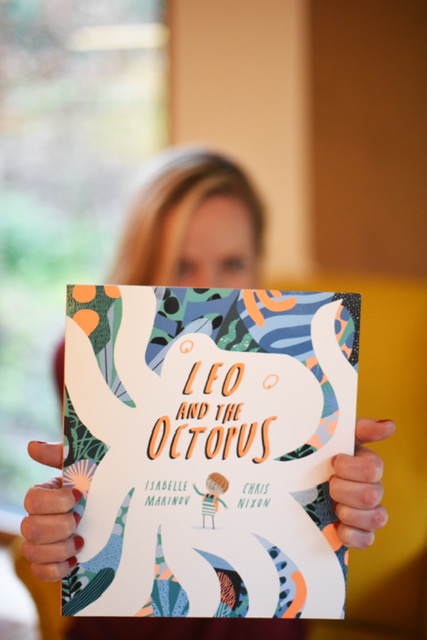 How did you go about publishing the two picture books?

The picture books I sold myself. Leo and the Octopus was published by Templar Publishing in London. At the time they accepted submissions without an agent. Now they don’t. With The Boy Whose Head Was Filled With Stars, I knew someone who knew someone, who gave it to a publisher and they liked it. That was really lucky.

How many languages have they been translated into?

Leo and the Octopus was translated into Luxembourgish, Portuguese, French and Korean and I think it will come out in China soon. There’s also a US version, which is a bit different to the UK version. I met the people from Binsfeld Publishing at a barbecue in Luxembourg. It’s such a Luxembourgish story (laughing). We talked and I said I’ve a picture book coming out in the UK. They said that’s interesting. That’s how it got published in Luxembourgish. The Boy Whose Head Was Filled With Stars has been translated into Korean and there will be one in Greek, Turkish and Danish.

Leo and the Octopus is being made into a film, but so too is a manuscript that you wrote a long time ago. I gather you’re not a newcomer to screenplays?

The very first online class I took in 2001 was on screenwriting. I like visuals. When I write I see pictures. Leo and the Octopus will be made into a 30-minute animation produced by Deal Productions, with the animation done by Mélusine Studio 352 in Contern. They did Wolfwalkers, a really nice production. That could go international as you can add any language you like. I’m co-writing the screenplay.

The other one is a short film I wrote in 2008, which won some contests in the US. At the time it got some interest with Sasha Alexander, a US actress who starred in NCIS and is married to the son of Sophia Loren. She wanted to do the movie but she started a TV show and didn’t have time. We lost touch and then in October 2021 she sent me an email saying she wanted to do the movie. We’re going to work on the script again and then it will go into production in the US. The film is called Sigurnost, which is Croatian for safety. It’s a dystopian sci-fi, a bit surreal and very ironic. Not for kids! 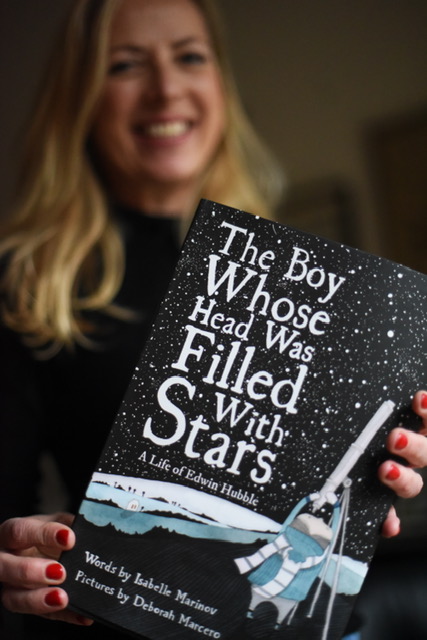 You also sold a middle grade novel to a UK publisher, Boy Underground, which will be published in 2022. Tell me more about this?

This story is set in the underground in Paris, where you have the catacombs and old quarries where they took out the limestone they used to build the monuments. I had this story about three kids who go down there and have adventures. When they go in they aren’t friends, but when they come out they are. There is an autism element because my main character is autistic and his gift is that he has a photographic memory for maps. So, he becomes the leader and saves them. The book will be coming out in the UK through Sweet Cherry Publishing, based in Leicester.

You said that you usually end up writing about what you become obsessed with. What are you obsessed with at the moment?

I’m still fascinated with astronomy. My new middle grade novel is about a girl. She’s very much into astronomy. I’ve also written another picture book which I sold to Templar Publishing and we’re editing it now. That will come out at the end of 2023. It’s called Henri and the Machine, a fiction about art.