Sophie Jung is a Luxembourgish descent, working with  sculpture, performance and text. She is based in Basel in Switzerland where she is also a guest mentor at the Institut Kunst of the Hochschule für Gestaltung und Kunst FHNW (https://www.fhnw.ch/de/die-fhnw/hochschulen/hgk/institute/institut-kunst) . Recent solo-exhibitions include The Bigger Sleep at Kunstmuseum Basel, Dramatis Personae at JOAN, LA, They Might Stay the Night at Casino Luxembourg – Forum d’art contemporain and Unsetting at Istituto Svizzero Milano. We met in early April on the occasion of the preparation of Freigeister, a group exhibition opening on the 12th of  November 2021 at Mudam Luxembourg - Musée d'Art Moderne Grand-Duc Jean.

Unfortunately, this conversation  cannot start with a studio visit. How have you experienced this past year with the lockdowns, cancellations, temporary closings of your shows?  Did it affect your productivity, your choice of media or your studio routine?

The pandemic has affected my routine and my type of work a lot. At the opening of my show at the Casino in Luxembourg everybody was still hugging and kissing, and a week later we all went into lockdown. They Might Stay the Night was my first show without the medium performance, where my sculptures had to hold my voice and, in a way, perform instead of me . This created a new set of demands and necessities on the pieces and my practice. It was a big challenge for me and a bit of a milestone, so the fact that it ended up being such a ghostly show was a bit of an anticlimax. 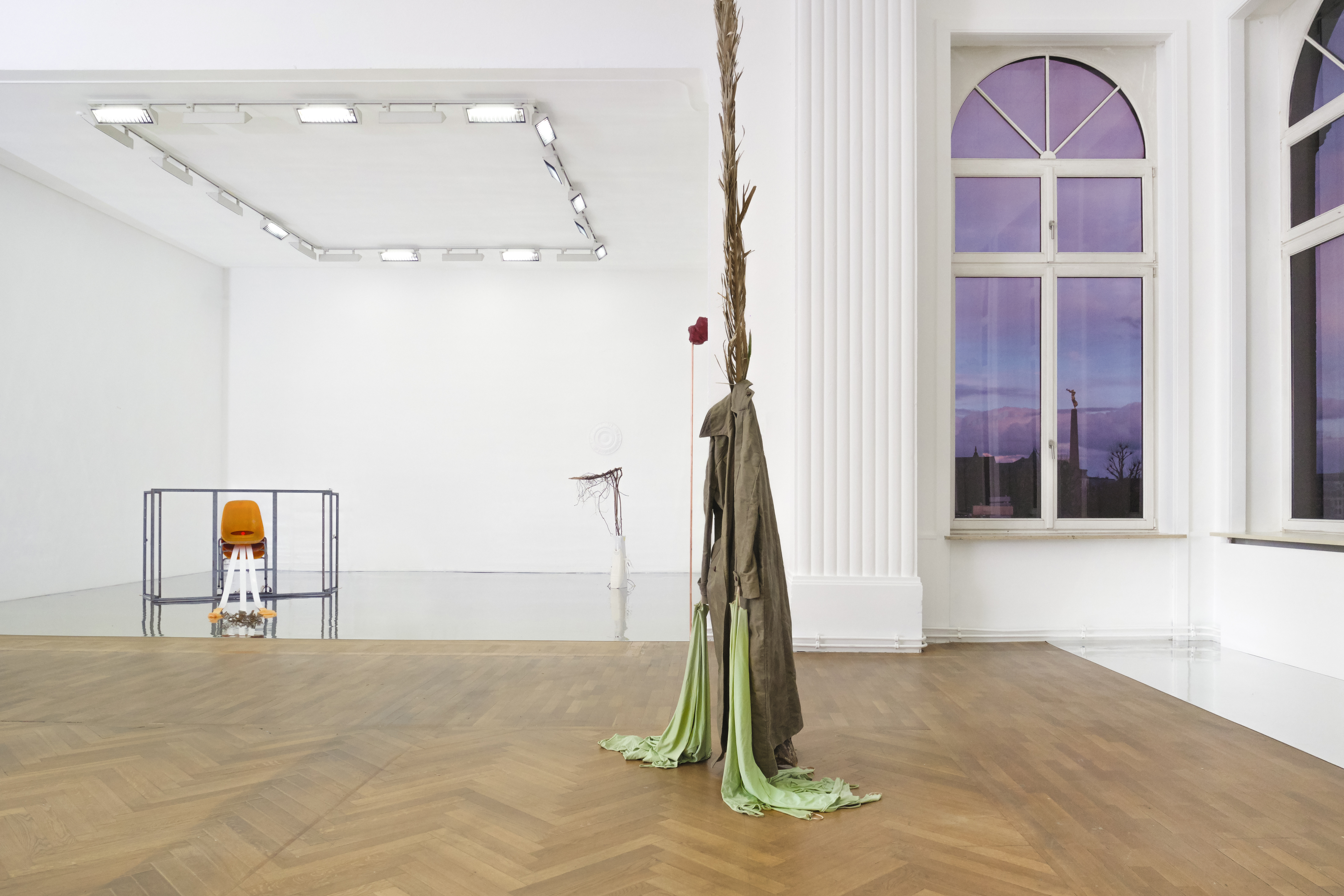 I did try out a few new things, with the new set of methodological parameters that the first wave of Covid-19 offered: Various institutions reached out in support, and I was invited to do small commissions, a few radio pieces, a work on a newspaper spread and, the most fun of all, a TV-show. A group of artists came up with a format, where they invited artists to do TV shows and I put together a  show commissioning some of my all-time favorite artists, showed clips of my most cherished stand-up comedians and cast the monkey cat, my feline companion, to be the host. In the end, I was very busy, but perhaps in a different, more structured way than before. Pre-lockdown I had always been on the move, I lived in London, my partner lived in Basel and both of us were always “en route” to install a show or do a performance here or there. The time spent at home, working in peace was actually really precious. My partner taught in his pyjamas, and I worked from bed. My nervous system and its state of constant arousal calmed down a lot which was good.

When I’m not travelling to shows I travel around to find objects. My approach  is always in response to the material world around me, I rely on finding things that I can later form into sets of assemblages. I collect things and put them in relation with each other. I observe how they communicate as an ensemble and  edit them towards  more precise poetics. I never start with an idea or a concept but respond to what my surroundings have to offer. Therefore, the lockdown and this extended period of limited travel has massively impacted my methodology, the way I approach my work. Borders were closed, flea markets cancelled, performances forbidden. It is a challenge when the tried and tested is no longer available, but I enjoyed learning new skills, screen-printing, drawing, painting even. Anything that is possible to do from home. 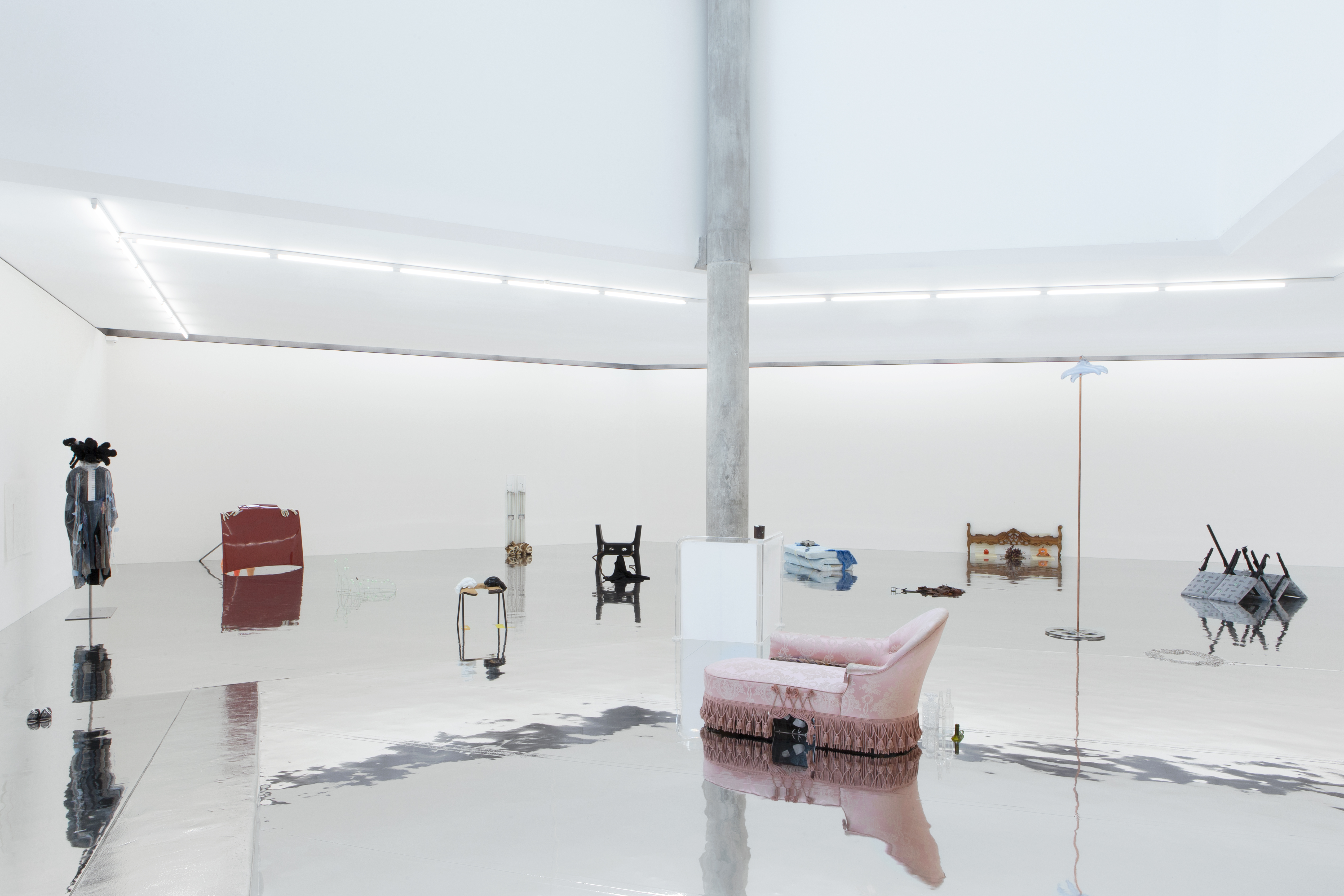 In your body of work, language, sculpture and performance intermingle. How do you construct the process ? Is there a beginning and end at all?

The starting point is always the found object; sometimes the object is the sculpture itself, sometimes it is an element of the sculpture, or part of its skeleton, its support structure. I find one single  object, five, ten or maybe twelve. Perhaps three of those will feel like they have a common mood. Then the others will be archived for another show or a later date. The process is like building a language. Each syntactic element needs to have a distinct role and position in order to create content. If two elements are too similar on one level or another, they can’t exist in the same alphabet. My first approach is always based on intuition and affect. I need a large object that sets the tone, has a strong presence, then  something fragile,  something heavy,  something soft. I need a diversity of conditions, and I need to find a precarious balance. It is like building a palette from which I then start painting. This painting process ideally happens in the exhibition space itself. I bring my collection of objects gathered for this specific show to the space and spend the installation time in free improvisation with the materials that I found. It’s not only important how they fit together but also that the gaps between them are properly composed. The difference between the works should be an equal kind of difference. Eventually the madness of all possible combinations slows down, a clarity comes through, characters, creatures, even fragments of narratives emerge. Often, I’m not finished until two hours before the opening of the show. Everything is contingent, if one element changes, then the others have to adapt. I engage in a constant scanning of the space for potential adaptations and “networkings”. 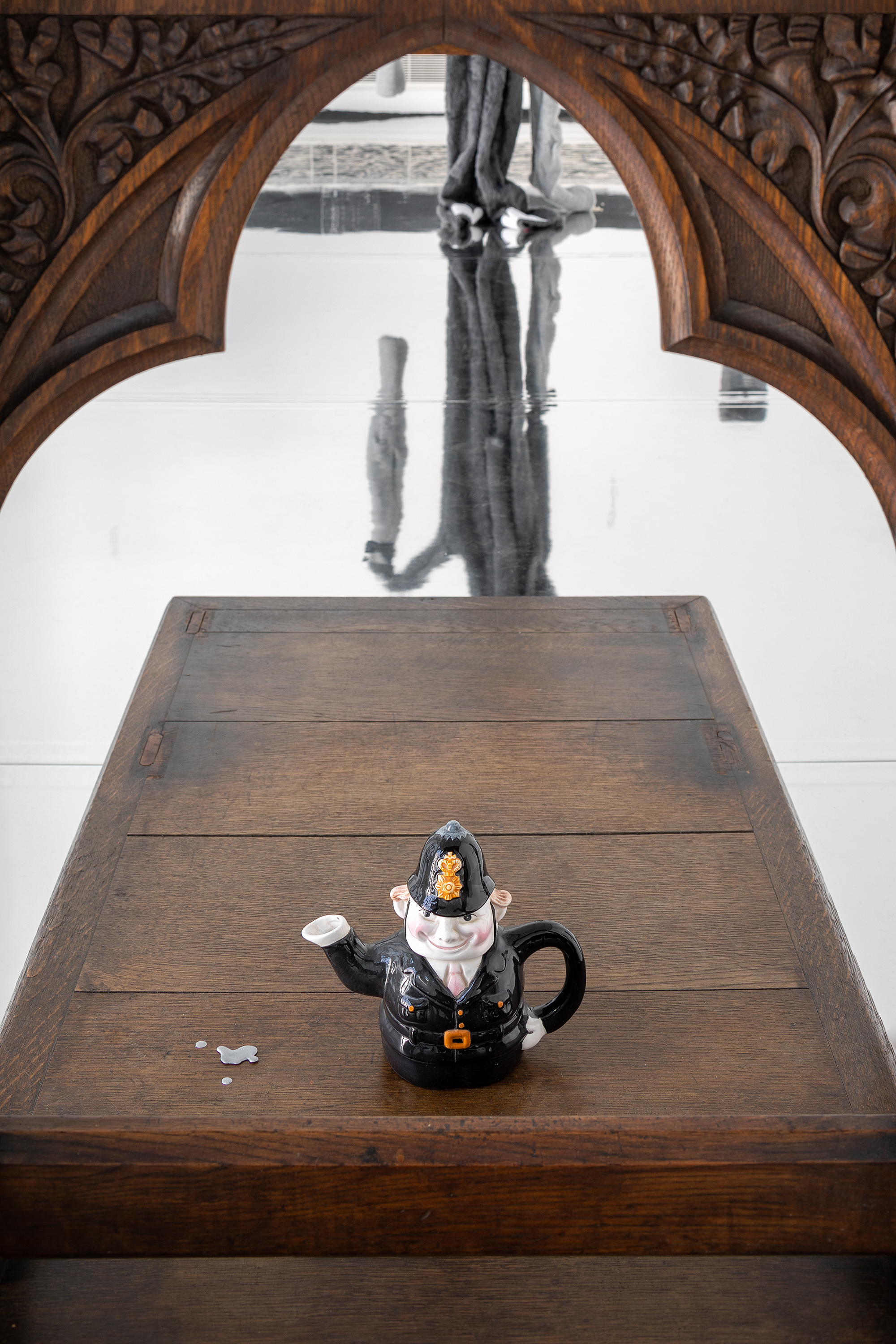 And of course, I can only start writing my performance once the set is in place. Shortly before the opening I look at the work, at the collection of objects in their specific assembled conditions and like at a Rorschach test I start reading them. I try to let the sculptures speak through me.

All the ideas, thoughts, offshoots, contexts, side-plots, jokes and tragedies they evoke come together in a big evolving mind map which serves as the base for the performance, the text or even just the titles.

The way I come to a work, the site-specific improvisation, the patience all that requires, is not ideally adapted to the limitations of galleries and institutions or vice versa.

While the performance is often improvised, based on the score of  objects in place, it often leads to a more crafted text, published or at least written after the event. The text, Frau Welt, that I wrote based on The Bigger Sleep (Kunstmuseum Basel Gegenwart, 2018), finally got published by Prototype Publishing in a wonderful anthology called Intertitles, two years after the show. I wrote half of it during the show and the second half based on photographs that I took when I was sourcing the objects. They are not directly related to the exhibition, but to its overall mood, It’s a front-stage back-stage script.

Yes, I would definitely describe myself as a feminist. On the one hand I think, the reason I use all these devices is because keeping life’s complexity and celebrating multiplicity is important to me, both ideologically but also instrumentally. In order to get the mind of the person watching involved, to draw them in, make them complicit. The confessional aspect cannot be separated from the social or political critique or even from rhythm. All these kinds of half-obsessions happen in a  body, they are not distinct.  A body of someone who hopefully is invested in some form of change according to their ideology. All of these feelings, affects and desires have to be knitted into one position, in order to be sustainable on more than one level. 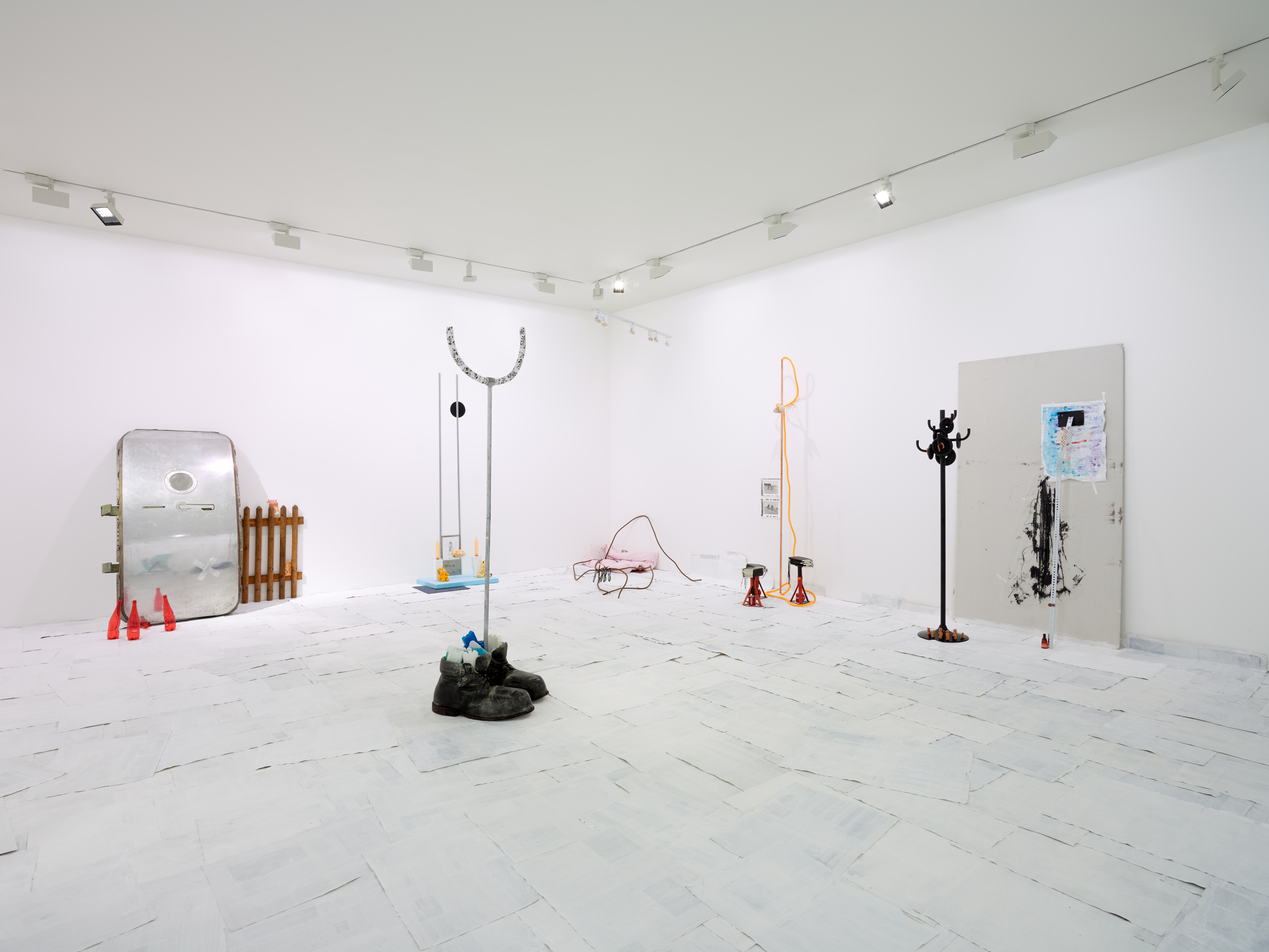 Strictly speaking, I don’t make what is generally understood as political art, because my work is not about one topic ever. I also don’t offer a solution, but my work is rather a way to find obscurer, possibly unexamined attitudes towards a topic. I am trying to draw  a network of thought out of its corset, its concept,  which holds it together but also makes it immobile.

I use all these devices to come to my main philosophy of defamiliarization, to make the familiar strange again, so that it can leave its stereotype and be re-examined. Whatever political theme I might take on –as I work instinctively, I can’t avoid it involving my hatred of patriarchal neoliberal predatory capitalism, systems of discrimination and the lack of grief around imminent ecological collapse and mass extinction – I mirror it with references against its major reading. I am trying to find  ways of getting into it or to read it against itself, because I don’t believe in singular metaphors or one to one meaning-mining. Once it gets too clear I twist it again and turn it into, say, a personal anecdote that can be either true or fictional. And the fact that it might be fictional, might topple it over into some absurd, bodily gesture.

Whatever I do, I don’t want it to be simple or easy.

They Might Stay the Night (curated by Stilbé Schroeder) was on show between 7.03.2020 and  25.10.2020 at Casino Luxembourg – Forum d’art contemporain: https://www.casino-luxembourg.lu/fr/Expositions/They-might-stay-the-night

Intertitles was published by Prototype Publishing Ltd in April 2021:https://prototypepublishing.co.uk/product/intertitles/

Freigeister will be on show Mudam Luxembourg - Musée d'Art Moderne Grand-Duc Jean from 13.11.2021 to 27.02.2022: https://www.mudam.com/exhibitions/freigeister-fragments-of-an-art-scene-in-luxembourg-and-beyond 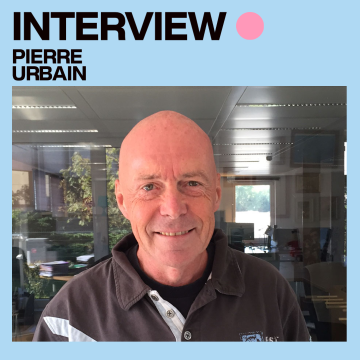 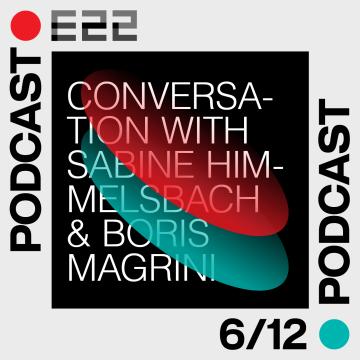 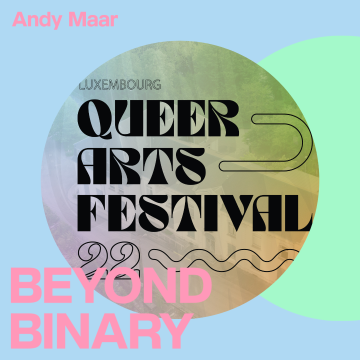