I see Luc and Scott from afar. They’re walking down the many sets of stairs that lead to the Gudde Wëllen terrace, where we agreed to meet. Midway through, though, the metalheads turn left and walk along the fortress’s cornice. Scott calls me moments later and suggests we do the interview at their ‘legendary squat spot’ instead.

Along with Michel ‘Nippel’ Remy and Miguel Teixeira Sousa, Luc Bohr and Scott Kutting make up Fusion Bomb. Competing against Luxembourg’s finest – Kaiju Ultra, Feradur, Mindpatrol, Parity, to name a few – Fusion Bomb managed to win the hearts of audience and jury at the latest Metal Battle. Metal Battle is held in forty-two countries. The forty-two winners are sent to the Wacken Open Air festival in Germany, where they compete on an international level. It is like Eurovision, just less cringy.

I approach Luc and Scott. Death metal is blaring from a phone and mingles cacophonously with the concert happening at Abbaye Neumünster, which the cornice looks onto. We talk about Wacken, songwriting and their 2019 album Concrete Jungle. Rest assured, Fusion Bomb don’t sound nearly as wickedly British as the following Luxembourgish-English translation would lead one to believe. (They have the earmarks of East Bay Areans.) In fact, their answers to my questions are much like their music: hyperbolic, super-fast and humorous..

You just came from a songwriting session. How did it go?

L: We wrote some genuinely wicked stuff. Four songs are ready to go.

S: Three are done, one is almost done. We finished one today and it’s going to be absolutely vicious. They’re bangers. They bang away on a different scale than Concrete Jungle did. What many people don’t know is that we’ve got an album ready. We’ll first release an EP however, probably at the end of summer or fall of this year. The EP is going to build a musical bridge between Concrete Jungle and the new album. The album is going to be an epic concept album. The EP’s got all the thrash and groovy shit Concrete Jungle has and a crossover attitude that welcomes many other influences. We went with our guts more, it’s more dynamic, like, there are heavy banger riffs and then there’s going to be something more atmospheric, more slow, something you didn’t expect but without losing any of the grittiness.

L: It’s more sophisticated than Concrete Jungle but it’s less technical and less ambitious than the new album. The EP is really just a bridge.

S: The album that’s set to come out next year is a tech-thrash album. It’s what we’ve always wanted to do and it’s the kind of music that we listen to and appreciate the most. It’s always been my dream to write a tech-thrash album because, to me, it’s the best music in the world. It thrashes and it’s absolutely virtuosic. I just marvel at it.

L: I just love it when you take thrash metal, which is a fairly simple and straightforward type of music, and do something more with it, when you tinker with it and come up with something wicked.

Congratulations on winning this year’s local Metal Battle. How does it feel, knowing you’re going to Wacken?

S: I’ve got history with Wacken. I was twelve when I first went there. I remember, we arrived at one in the morning. I felt as if on holy ground. I had this holy feeling in me. I remember thinking, this must be the way deeply religious Christians feel in Vatican City, the way deeply religious Muslims feel at the al-Haram mosque or deeply religious Jewish people at the Wailing Wall. Metal history was written here, metal history is being written here every year. This was just when Wacken started to cost a hundred euros, selling out every year, with seventy, eighty, ninety, a hundred thousand people going. I turned thirteen there. I had all my teenage birthdays at the festival. I would go with my mum and her colleagues from work. Her colleagues are OG metalheads who have been going since the first edition. It’s funny, going now, it’s like going full circle. The circle closes.

L: I feel like going to Wacken is taking a weight off our shoulders. We really went at it hard in 2019, it was great, they were many beautiful moments. It looked like 2020 was going to be our year, we were supposed to play festivals all summer. Then, corona came and all of a sudden, everything went to hell. It was a hard time for the band. But 2022 seems to make up for it.

S: We played festivals in Belgium and Germany and now…

L: And it can do great things for the band. It would be incredible if we win.

S: We’re going there to win. That’s our attitude.

L: And if we don’t win, there’s going to be many people we can meet, there will be promoters. It’s all good. 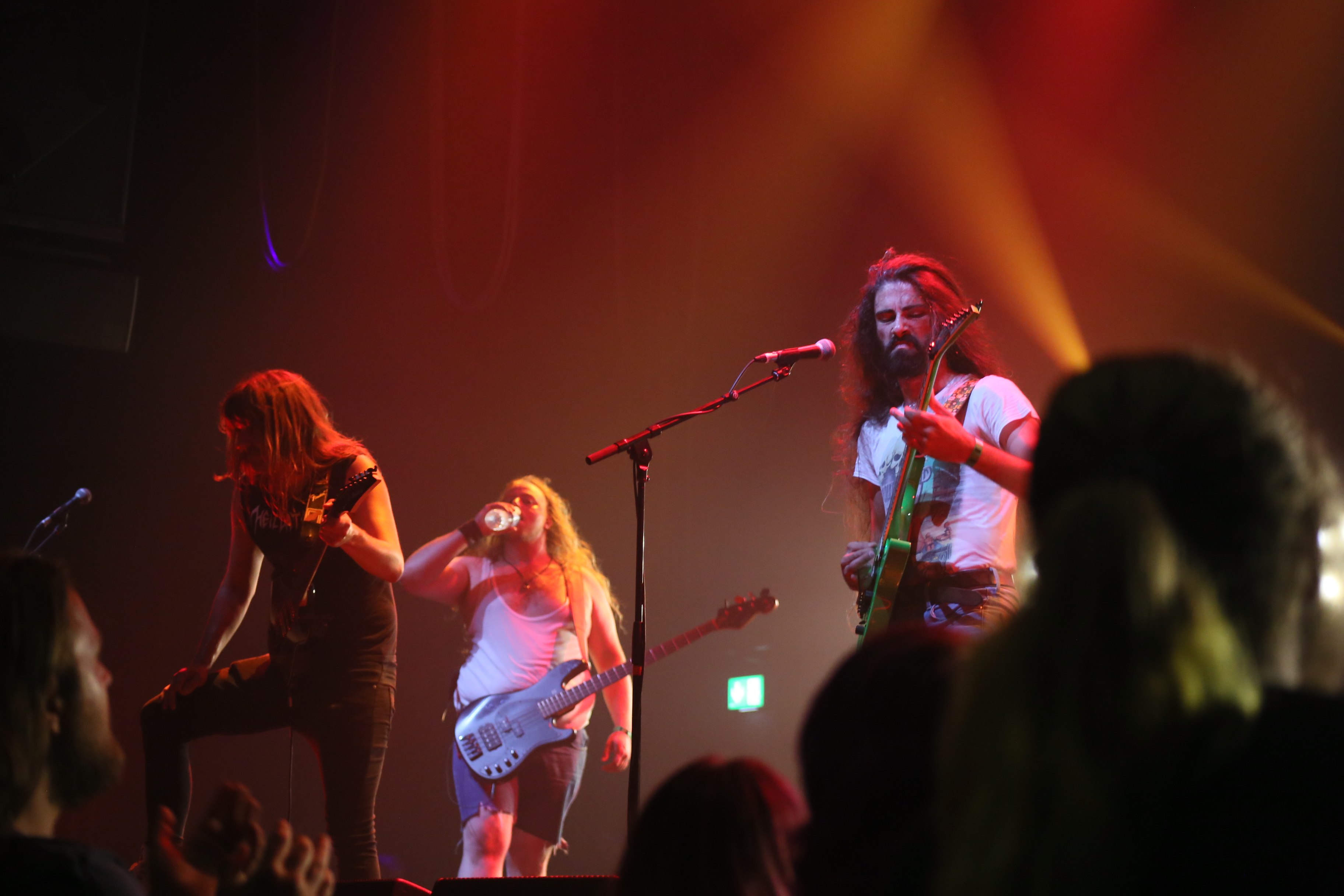 You asked the sound engineer to play Turbo Lover by Judas Priest after you won. What do you associate with that song?

S: (Laughs) I’m being deep, and you’re like, ‘power’. But it’s true. That song is heavy metal power. It was forged on a gigantic anvil and made of dragon scale, that’s how heavy metal it is.

L: But in the eighties, under sexy neon lights. Like Scott said, friendship. We’ve had the most beautiful times with that song.

S: I always play matchmaker when that song plays. I’m good at it.

S: I’ll ask the DJ to play that song and he’ll say: ‘hell yeah, I’ll put in next in the cue.’ And everybody’ll go crazy on the dancefloor.

S: Whoever says they don’t like it are hypocrites.

Luc, you had some technical problems with your guitar pedal during the show and Miguel helped you solve them in a matter of seconds. Does it help to have a sound engineer in the band?

L: It’s as if you’re stranded on a deserted island and you find a monkey who happens to be a surgeon.

L: The monkey climbs down his tree and he knows how to transplant organs and all, and you’re saved. Nothing bad can happen. That’s what it’s like being in a band with Miguel. Many people who play in bands talk the talk, but Miguel has a Master’s in sound engineering. He’s a machine.

S: He knows so much about music, it’s mind-boggling. And the way he delivers his guitar riffs, it’s clean as hell but not sterile.

L: It’s just a privilege to be his friend.

L: He could pick up a tambourine and record an album with it. He can probably play the organ and nobody knows about it. He writes the most wicked shit, man.

Nippel plays bass and sings the backing vocals. Both bass and backing vocals are often under-appreciated in their contribution to the musical ensemble. Can you tell us more about his duties?

S: When we started Fusion Bomb, when we were fifteen-year-olds, we were looking for a singer and we couldn’t find any. So we sang ourselves. Miguel’s always had a more high-pitched thrash voice, it’s very classy, he does these distorted shouts, but Nippel has a very deep and raspy, Motörhead-like voice. We wrote many songs where they take turns singing. They complement each other. Nippel is Miguel’s counterpart.

S: Whenever people tell me we played well after a gig, they always add an extra kind word for Nippel, because he’s a ‘geile Sau’. He may not play the most intricate stuff, but he cements all of the riffing with his wicked bass sound. The way his right hand bangs into the strings, it’s insane. 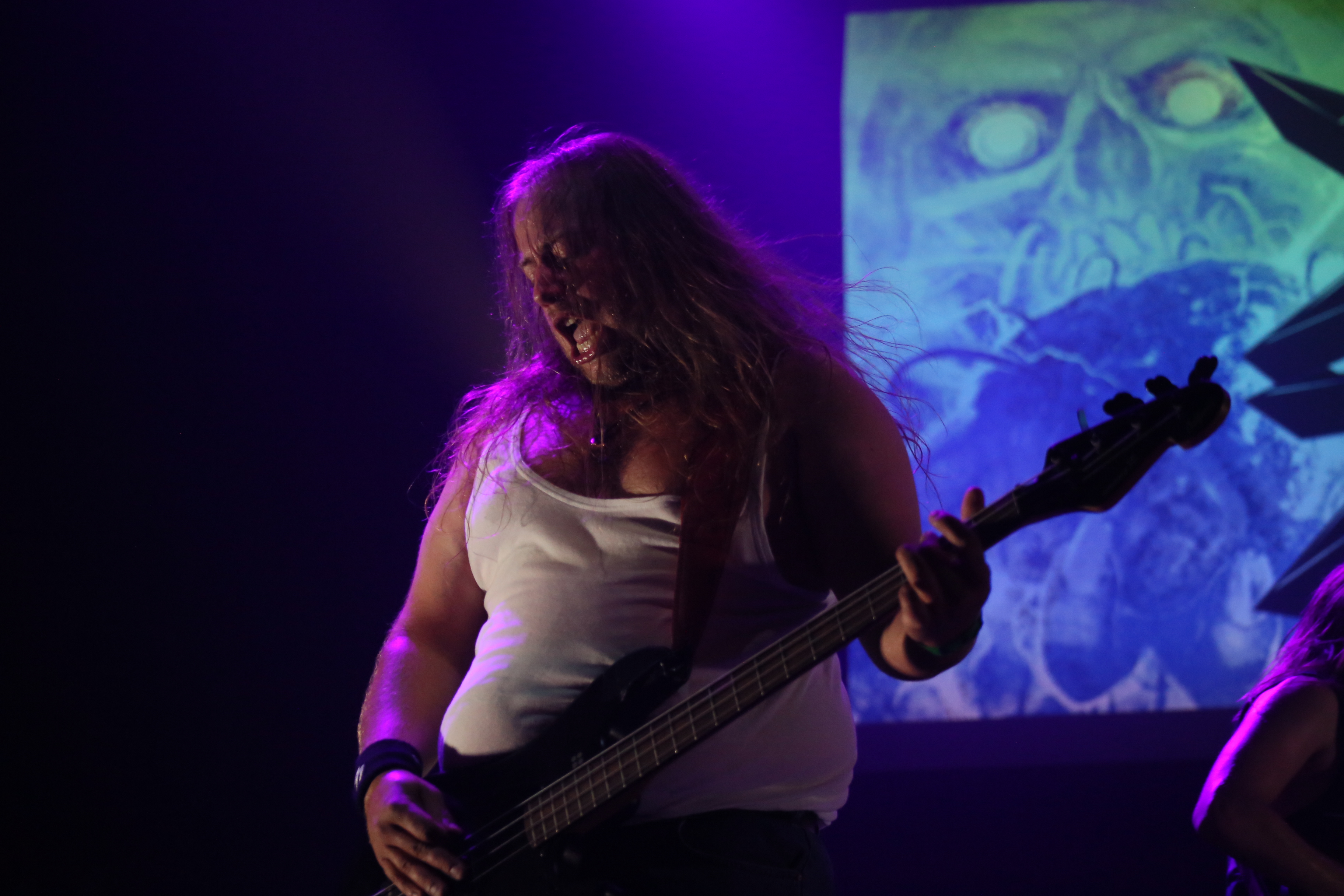 I delved into your lyrics.

I’d never noticed how funny you guys are, and it struck me because I never thought of metal being comedic. What’s the funniest lyric in all of metal in your opinion?

S: ‘I am the table’ by James Hetfield.

L: Now that’s an insider. I want to say, crossover-thrash is a genre that’s very brief and to the point. The songs can last one and a half minutes and be all punchlines. The lyrics of Surrounded by Idiots by Wrathchild America are full of roasts. And if you have that kind of humour, there’s Carnivore.

S: Or Ludichrist with Fire at the Firehouse.

L: Those lyrics tell a very stupid story. It’s about a guy, one of the higher-ups at the KKK. He wakes up one day and sees he’s turned black. Then his friends hang him. The moral of the story is that they’re all complete morons.

One needs a lot of courage to write the things you guys sing and to perform them the way you do. One also needs a lot of anger. Does courage draw from anger?

L: I’m never angry when I write songs. Sometimes I’m a bit stressed and I want to make music to cool off, but that stuff is never as good as when I’ve had a good night’s sleep or I’m in a good mood.

In Zest of Scorn, you speak of ‘hate as a progressive force’.

L: That song doesn’t reflect the way we feel. It’s more of a story.

S: It’s barely a story. It was written from the emotional point of view of a character who’s as angry as can be. We’d written a very aggressive instrumental, and we needed lyrics that matched that feeling.

The lyrics to You’re A Cancer To This World read like an anti-PC anthem, yet you’re left-leaning and half of you are vegans. How does that work?

S: It’s not even an outlash against PC. It’s about how there’s extremism everywhere, including in your own camp, there are people who are authoritarian and patronising. Those things need to be called out because it just doesn’t happen often enough. One just does not like to talk about the problems of one’s own camp. You’re A Cancer To This World is not meant to relativize what happens on the other side of the political spectrum. It’s just, thrash has always been a political genre, there are many lyrics about social injustices, what’s wrong with society and all. There’s much about autocracies, about oppression. Most South American thrash was written by people living under dictatorships, who were heavily oppressed and fought against it. It’s about people who don’t want to solve problems, they just want to destroy.

Another thing I’ve noticed is that whenever you mention god, you mention his absence. In Concrete Jungle, you say: ‘so far from god’ and in TMNA, you say: ‘but he’s no god.’ At risk of sounding esoteric, where do you guys find god?

S: It’s more than a meaning of life. It’s a historical duty.

S: It’s our purpose. We need to do this.

Is there anything else you would like to add?

L: The kids should listen to more thrash. I hope that what Luxrap is nowadays is going to be thrash metal again at some point. Everybody is going to go skateboarding and listen to Exodus and Fusion Bomb and all. And there should be a thrash skatefest in Luxembourg. That would be wicked.

S: Yes, and it will be sponsored by Thrasher.

S: Shake your ass to thrash.

You’re A Cancer To This World music video